Today while visiting my sister in Tewkesbury just north of Quebec City, I took some time to go to Stoneham to ski some laps for the morning. We had received a little freezing rain during the night, that was covered with a layer of about 5cms of snow. I arrived at the mountain early for the best parking, and to beat the March Break crowd for some early turns. The skies were cloudy, on a day that was supposed to be sunny. The temperature was a fairly mild -5 degrees. 43 trails and 6 lifts were operating. The conditions were really good with groomed packed powder over a firm base. The coverage was excellent. 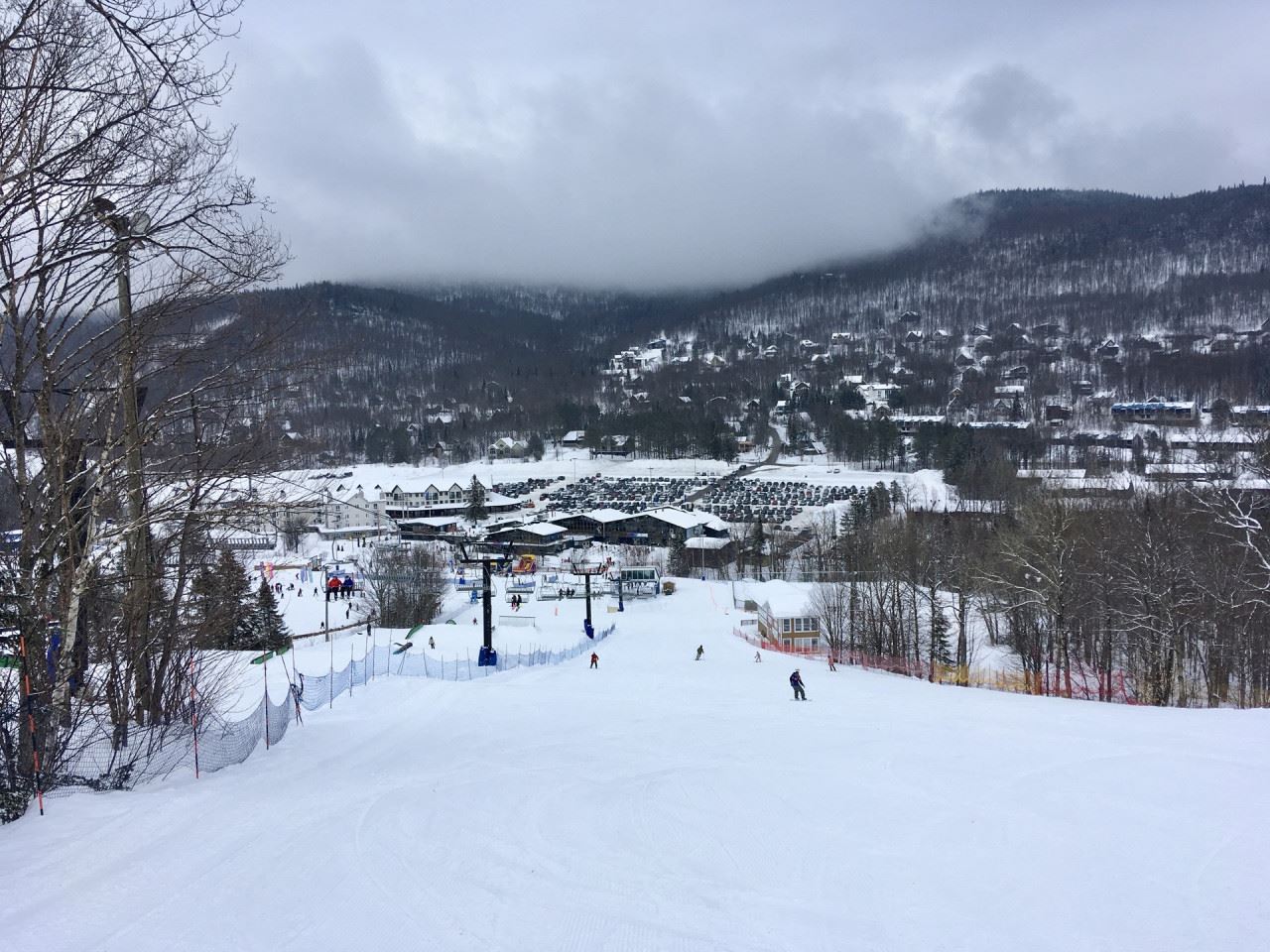 The first runs of the day were up the l'Eclipse Quad. There was no wind, and it was quite comfortable. The combination of the top of the Randonnee trail, Toosey-Chandler, Petit Champlain, la Gonnet, to the bottom of la Rock and Roll was the first run of the day. A great little combination to get the day started to warm up. A good mix of easy beginner and intermediate trails. Next it was the Gonnet over to the Rock and Roll, and then the fill length of the Rock and Roll.

The Randonnee, and the bottom section of the Rock and Roll: 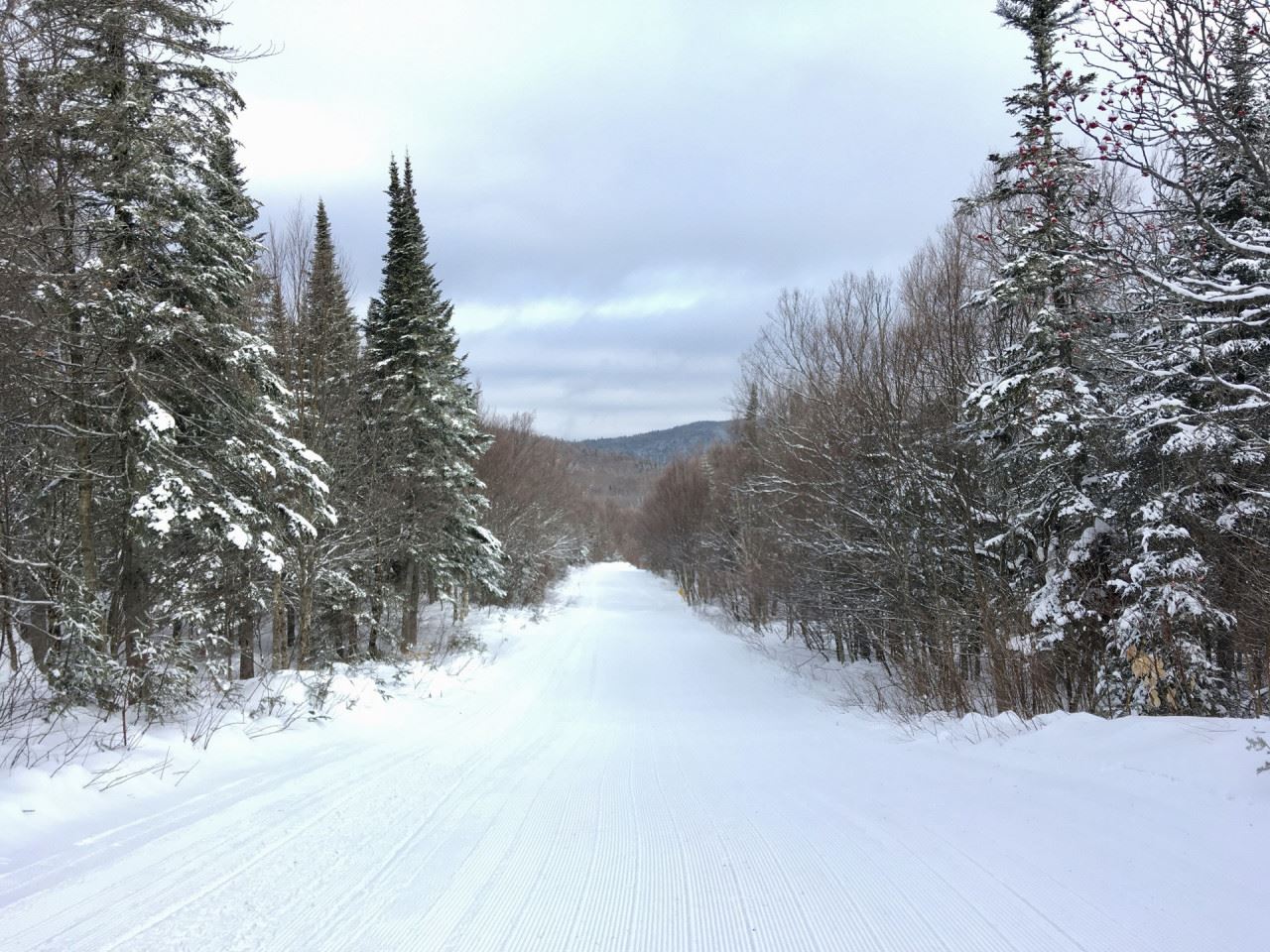 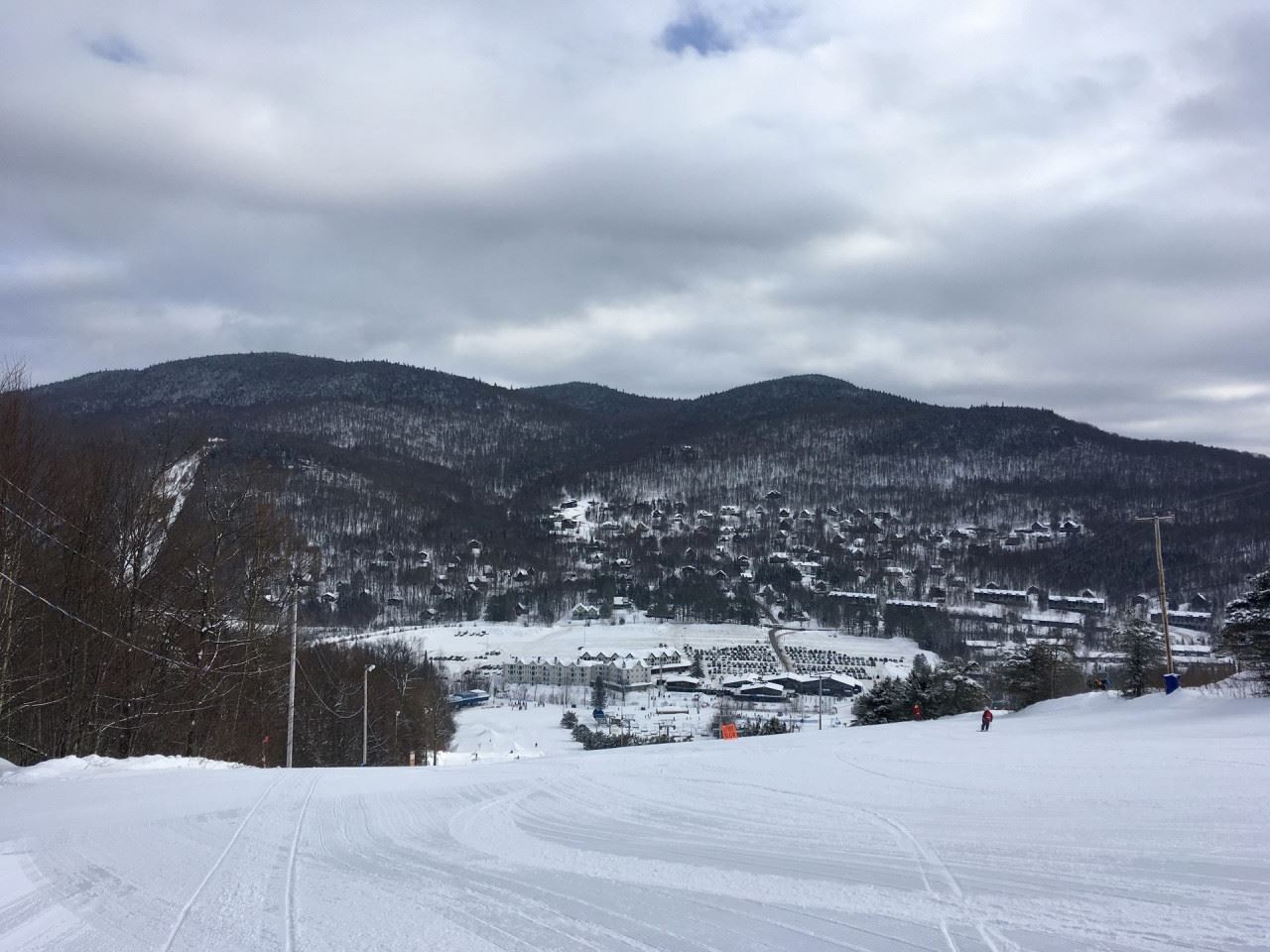 Then it was onto the l'Alize quad for a few laps down the Pionniers, the bottom of the Walter Moisan, and the Bon Vivant. One run down the Chouette. Line ups at the l'Etoile and l'Alize quads were no more than 2-3 minutes tops. One more ride up the l'Eclipse Quad to ski the Randonnee to the Petit Champlain and the bottom section of the Gonnet over to the Tempete Express Quad. When I got in view of the lift line, there was quite the lineup that looked like it was going to be a wait of 10 minutes plus. The singles line was your best friend as it was basically 2 minutes, and you were on the chair.

The Pionniers, and the Bon Vivant: 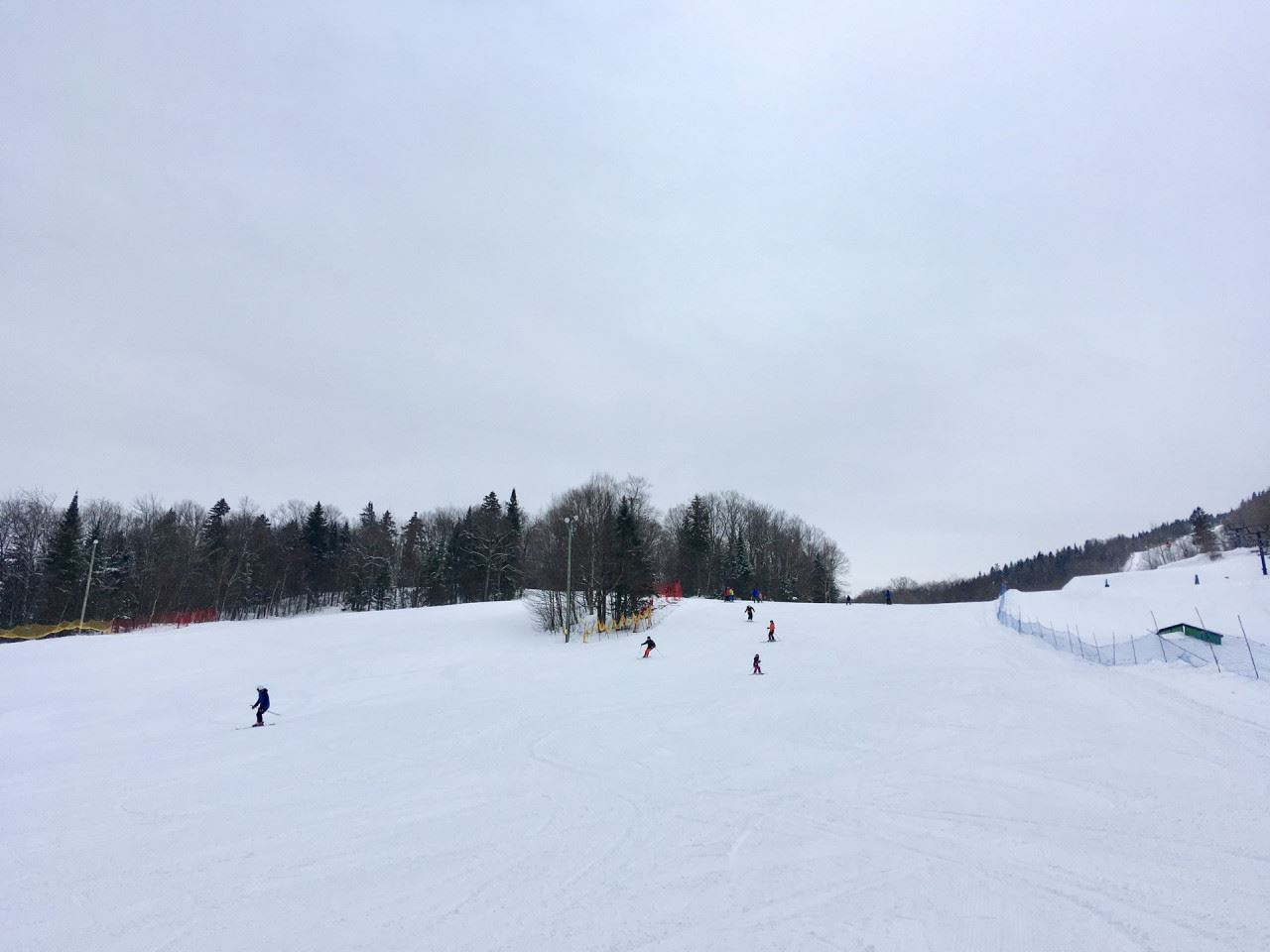 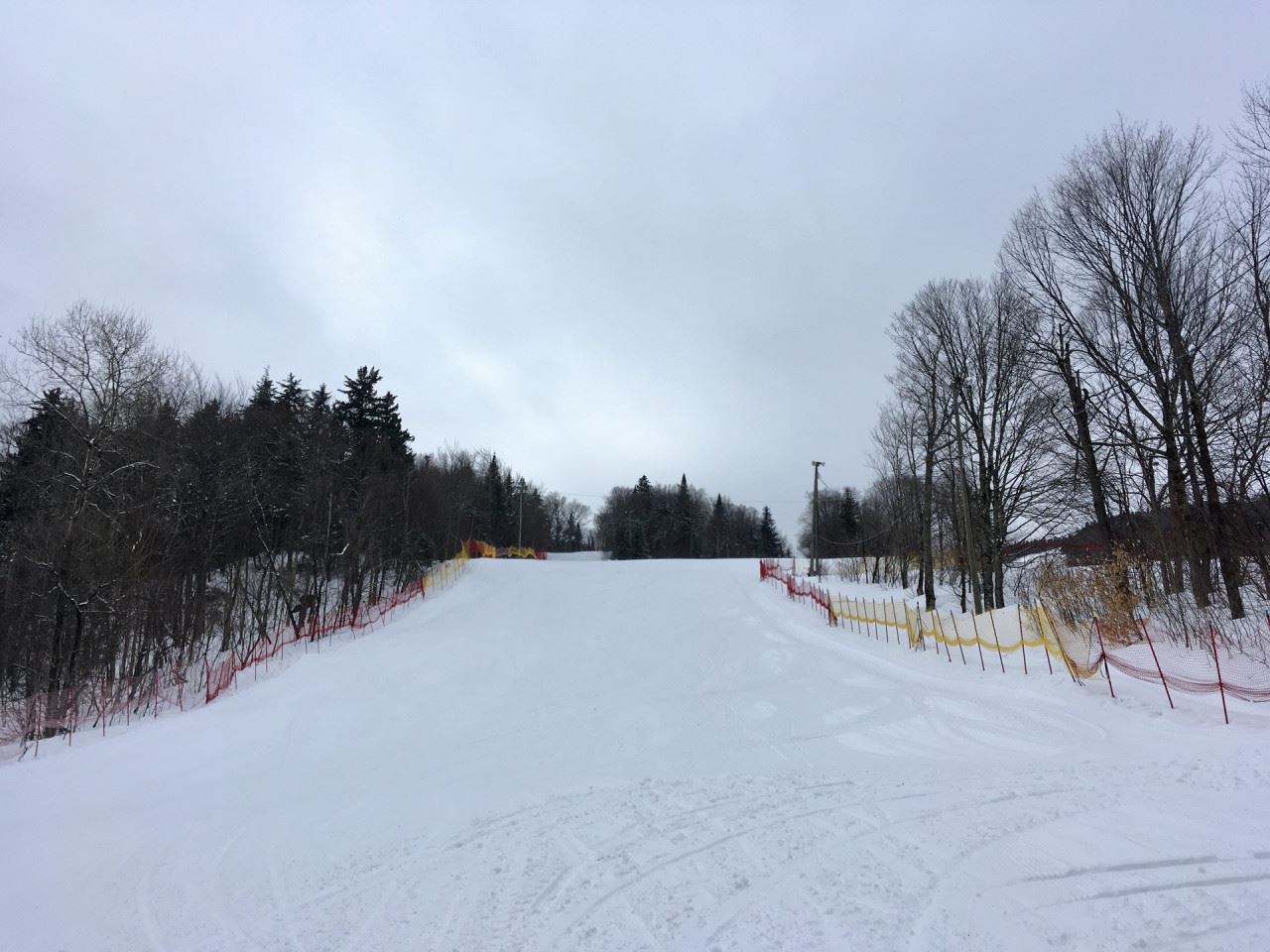 The Lineup At the Tempete Express Quad: There are two lines for foursomes, one line for doubles, and one singles line. 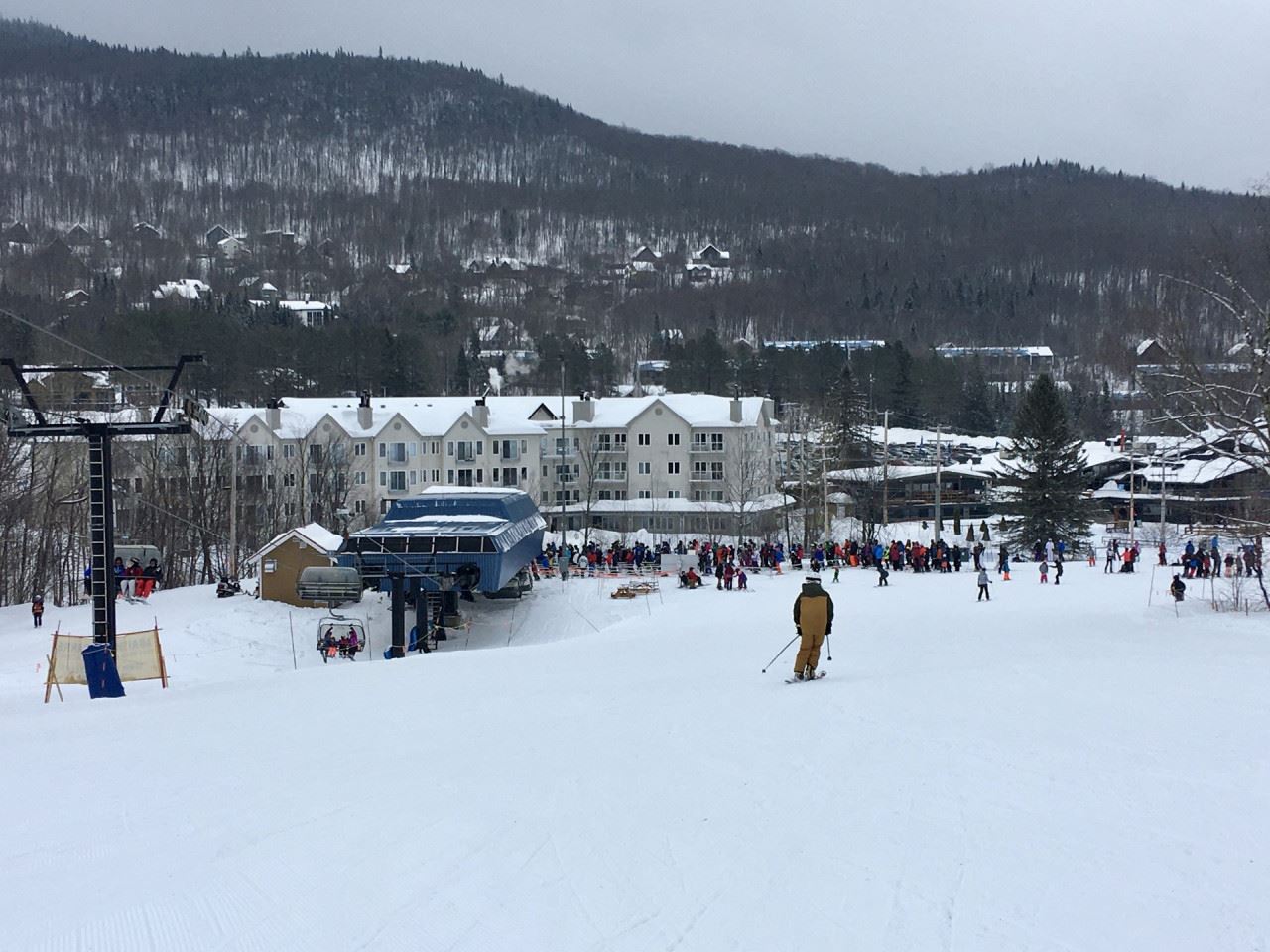 It was up the Tempete Express for a couple of rides on the Cantons, another section of the Randonnee, and then the bottom of the Laurentienne. It was foggy at the top of this section, but not to the point where visibility was difficult. The last run was down this section was the full length of the Petit Champlain onto the Gonnet, and the bottom of the Rock and Roll.

The top of the Cantons, Randonnee, and the Petit Champlain: 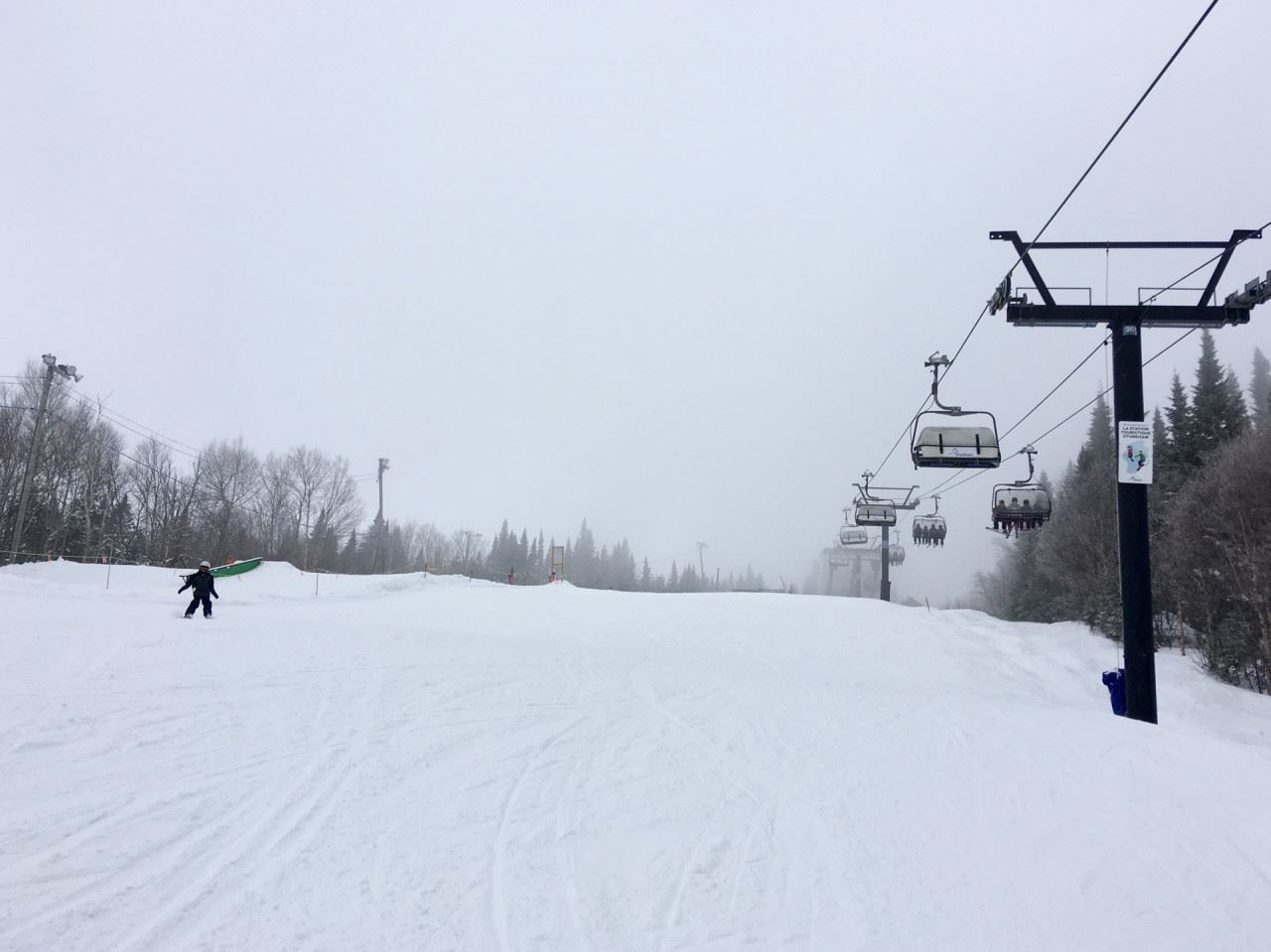 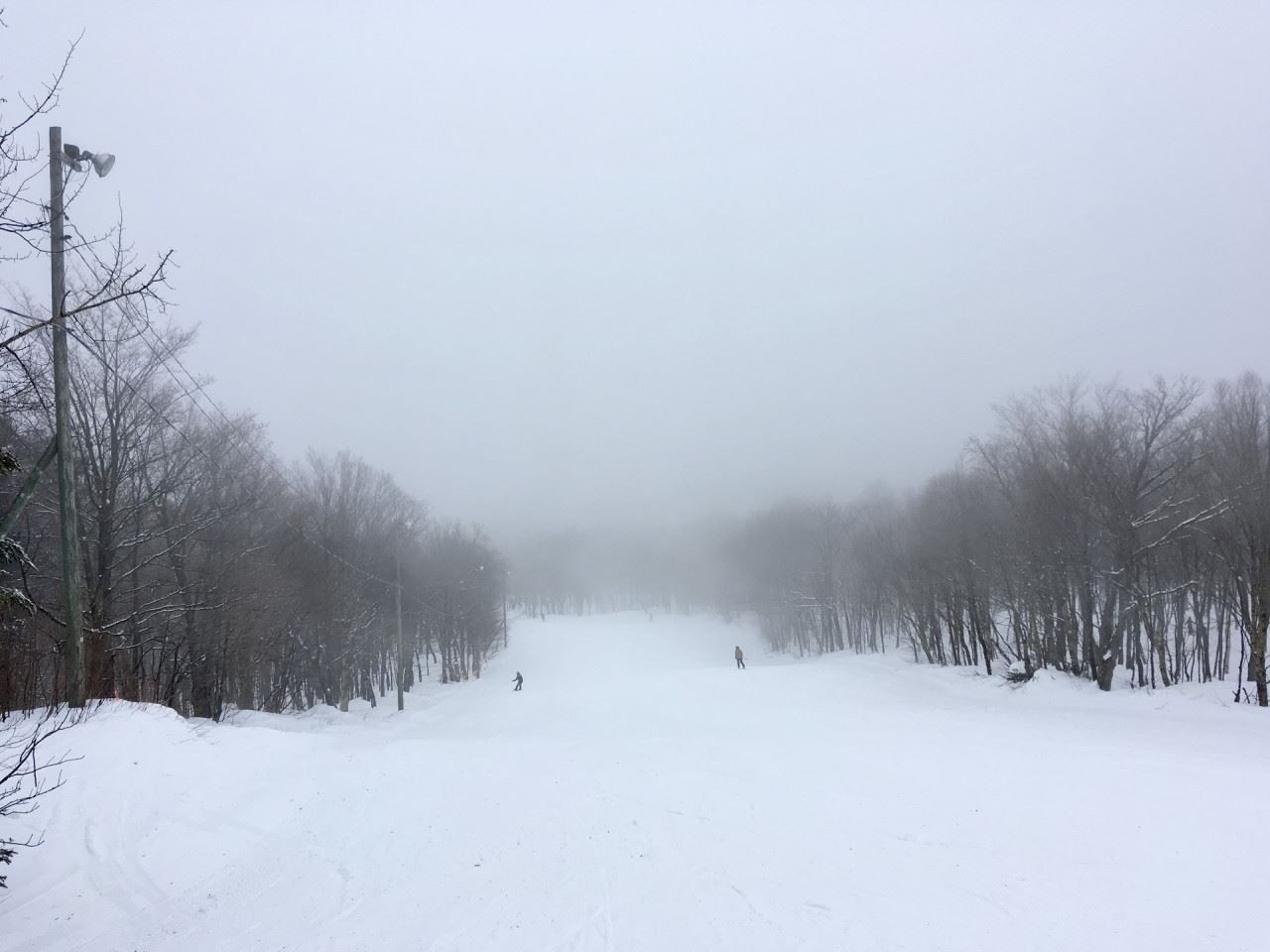 By 11:00 the temperature was above zero and the snow was getting a bit spring like. Not granular nor slushy but definitely heavier. Good snowball making snow. I ended the day at noon to make my way back to my sister's for lunch. This was my second visit to Stoneham, and I had an excellent day of skiing. I will definitely be back again. Thank you, Stoneham for the great skiing!

Here are a few more scenes from the morning: 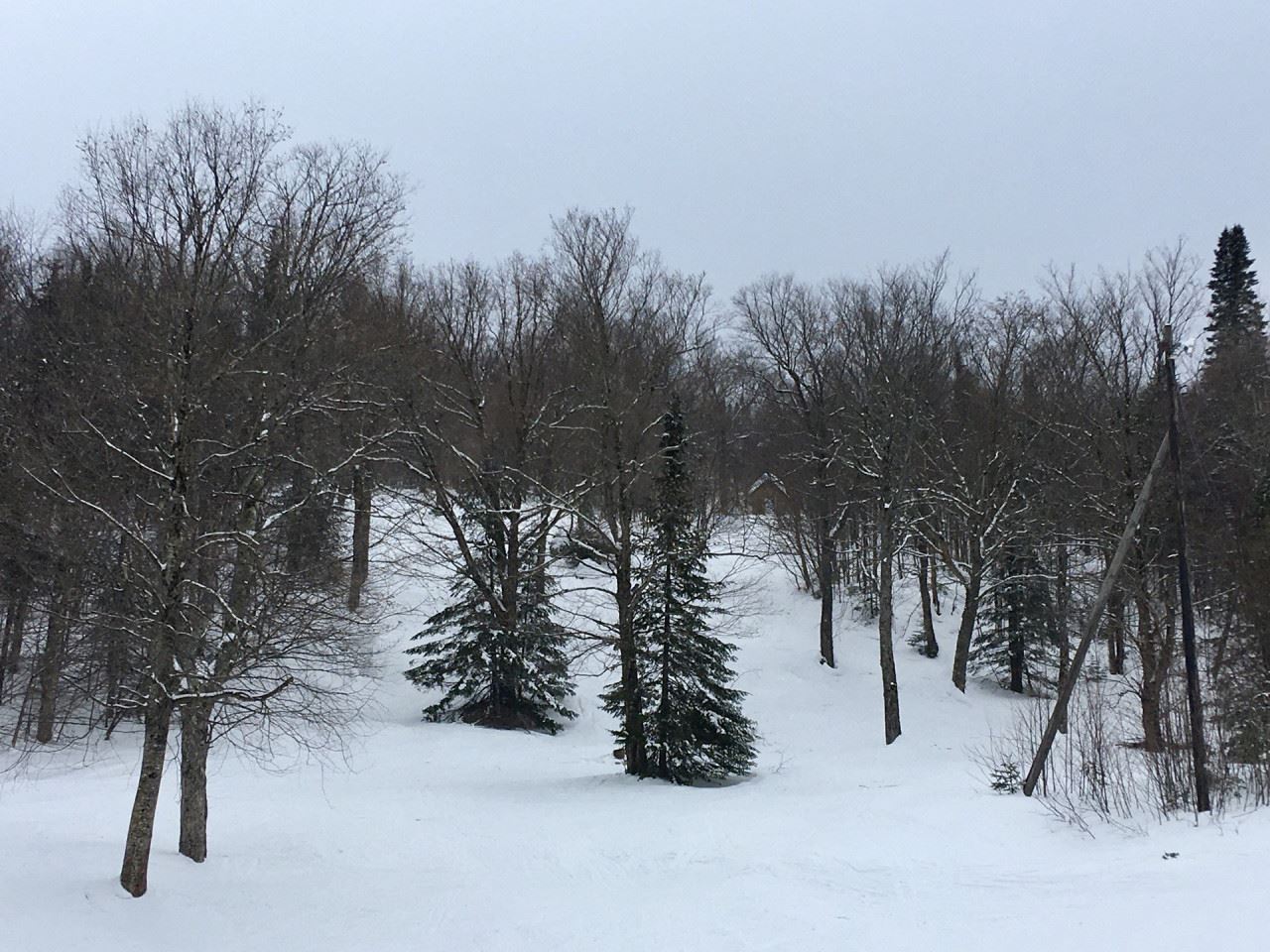 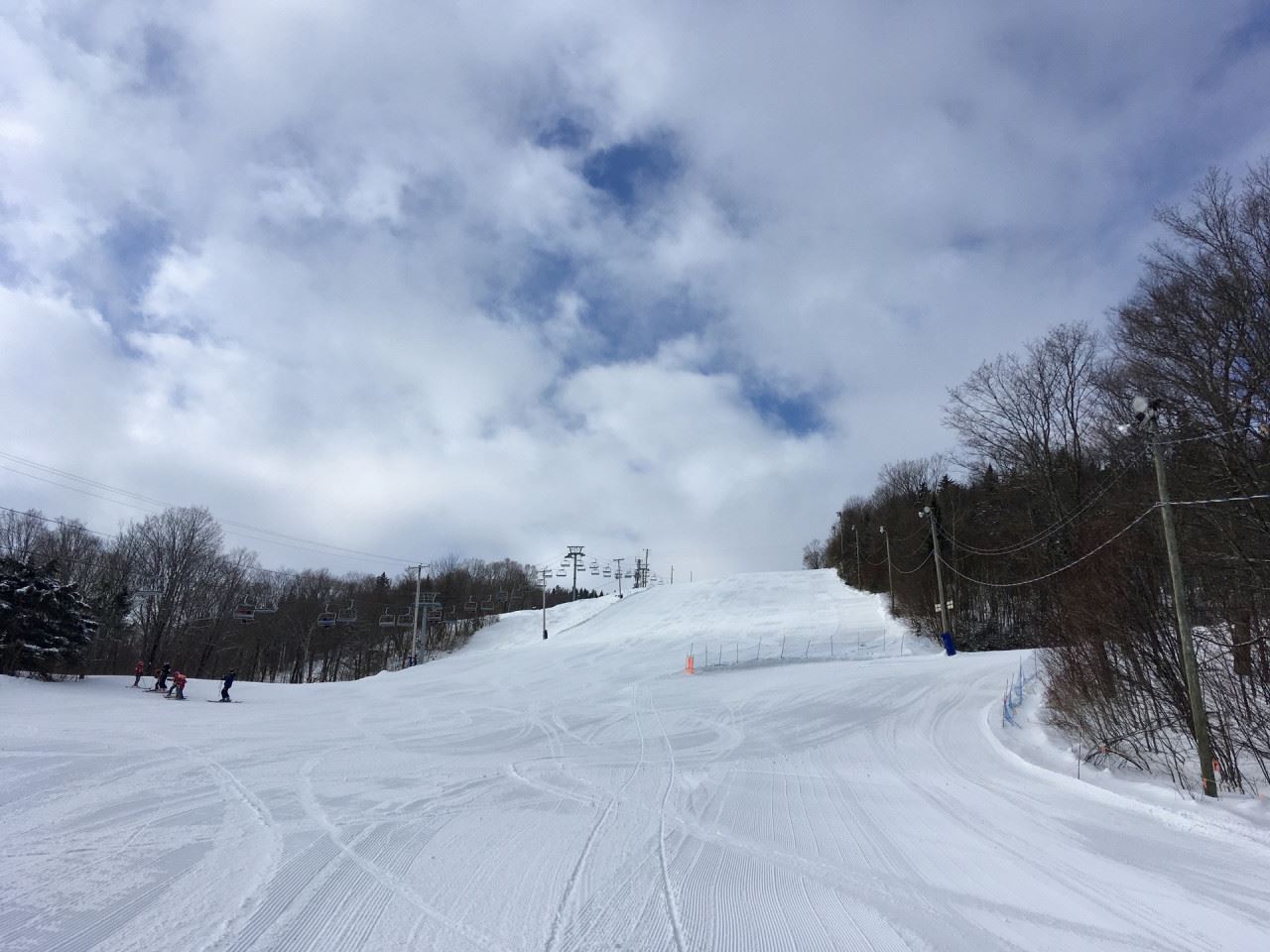 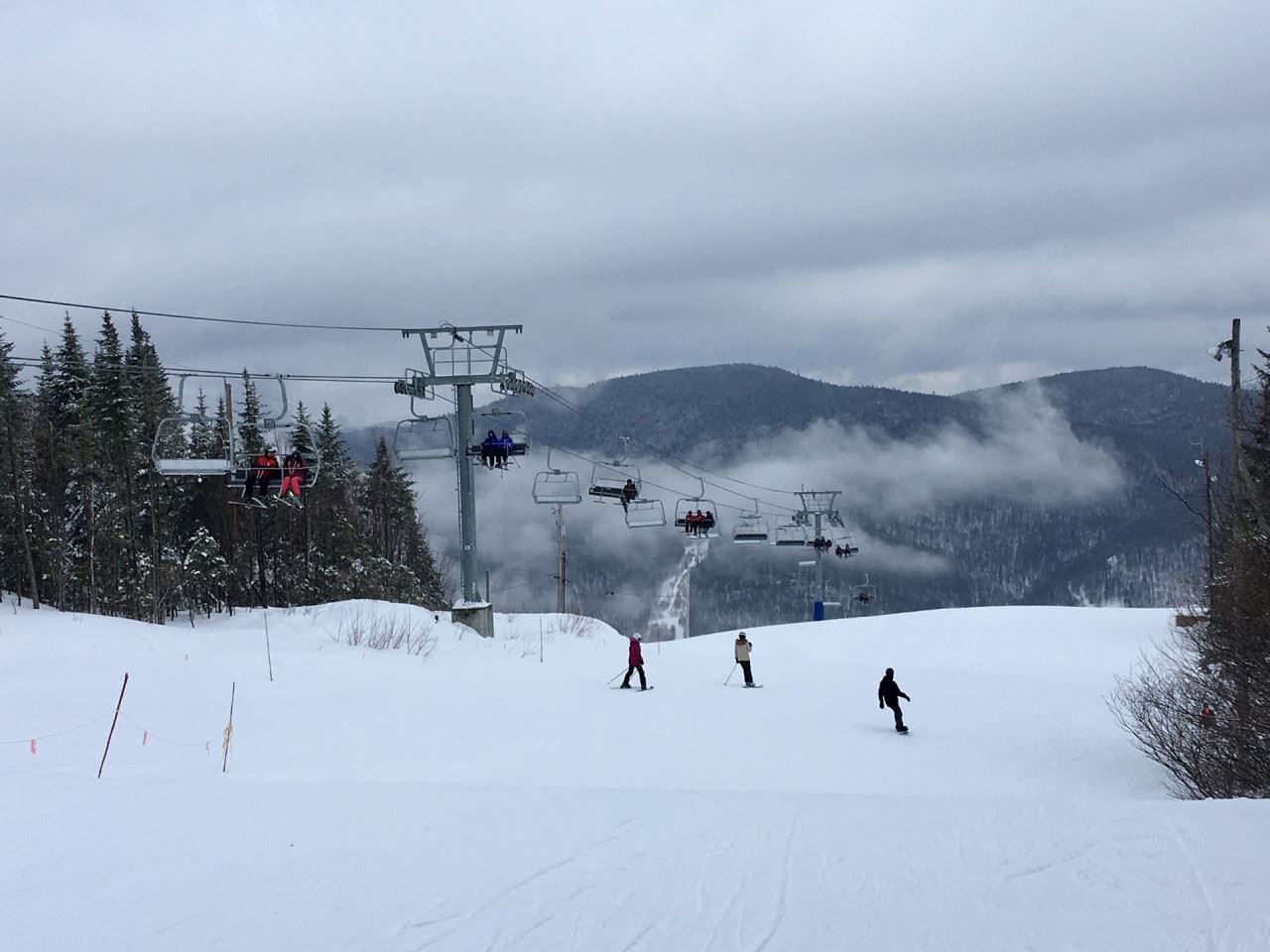