Skison 2020 got its official start on Friday, October 30, 2020 with Sommet Saint-Sauveur's soft launch opening, and while I was not quick enough on the draw to participate, I was all set for Day 2 which delightfully fell on Hallowe'en! As always, Sommet Saint-Sauveur is the first to open in the East, even beating out "longest season in the East" rival Killington this year. As it happens, the state of Vermont has delayed releasing its ski resort opening guidance as covid-19 cases in Vermont have recently seen an uptick, and Killington has tentatively scheduled November 19 for opening.

My day started with a hearty brunch from our neighborhood spot Fabergé which gave me lots of time to get ready while waiting for our brunch delivery. I packed up the car with my two sets of Kastle James XX90s, intending to ski on the pair with the best tune and drop the other off at the shop for some fresh wax.

I have followed along with interest as other regions announced their operations guidance for mountains and skiers, and one resort asks that skiers and riders participate in keeping our mountain communities safe by self-monitoring for symptoms. As such, this season I'll be checking my vitals with a thermometer and pulse oximeter before leaving home. Covid-19 prevention is a shared responsibility, and is especially critical if you are travelling from a red zone to another zone (which is not recommended, but is not forbidden). I have also packed in my ski bag a bottle of alcohol-based hand sanitizer and medical masks, in addition to the required double layer ski mask per the ASSQ directives. My pulse is just slightly high because STOKE!!! ...and I remain as cool as a cucumber.

I arrived at the mountain by 3:30pm and while the parking lot was much fuller than I anticipated, I was able to easily find a good spot close to the lift. Before getting ready, my first stop was straight to the ticket counter to be sure that my passcard was activated. Saint-Sauveur has moved their guest services reception outdoors to the right of the main entrance so that guests can avoid going into the lodge unless it is necessary, and they have also added a greeter station at the entrance where you can sanitize your hands before entry, much like they have in the summer during waterpark season.

At the time of my arrival, the line for L'Etoile extended from the lift halfway to the edge of the 70 Ouest run. The line was divided into two lines with at least two meters of distance between each line, and skiers and riders were pretty good about keeping two meters of distance from one another - I only had to tell one teenager to back off my skis. The lines merge at a 90 degree angle to the loading area, and was managed by allowing alternating groups of ten or so to move into the loading area. I would estimate that I waited about 15 minutes to get on a chair from the time I entered the line. A friend who arrived earlier in the day mentioned that the line was 30 minutes long just one hour before I arrived, so he spent the time in line stretching and warming up while his buddy hiked up the bottom section multiple times instead of waiting it out. 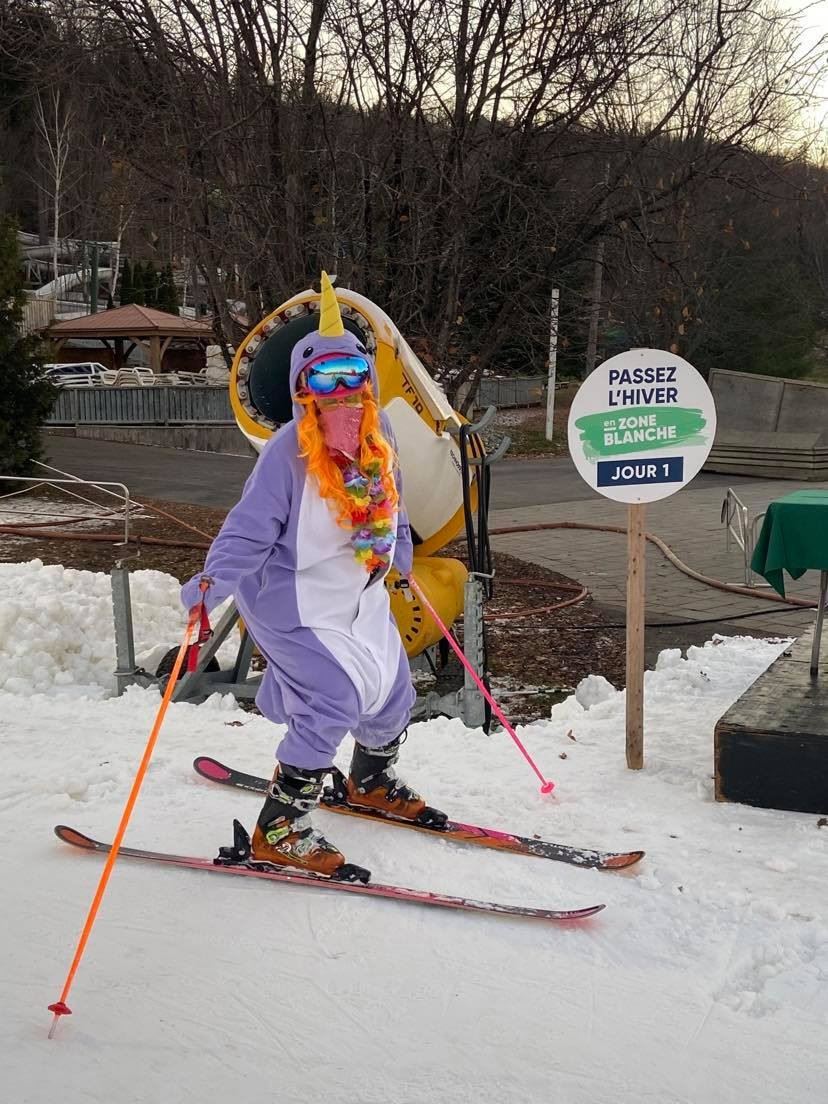 Gnarly the Gnarwhal obligatory selfie with the Day 1 sign, even though technically it is Sommet Saint-Sauveur's Day 2.

Another ski blog, the Ski Octopus, posted a rather fear-mongering commentary about the length of the line and number of people, perhaps without considering that Sommet Saint-Sauveur already has a whole summer of waterpark and mountain bike chairlift line management behind them and closed their season with success and no outbreaks (to the best of their knowledge). As someone whose goal it is to promote skiing in the East regardless of conditions, I would suggest that such reporting and complaining about these conditions is not doing any of us, the resorts, or the ASSQ a favour -- keep in mind it only took a few similar reports to shut down Cervinia in Italy immediately following their first weekend, and it sounds like Cervinia was not prepared for the crowds they received while Sommet Saint-Sauveur implemented a number of strategies for crowd control and flow. Instead, I really want to highlight that Sommet Saint-Sauveur's strategies, while increasing wait times (as can be expected), did a great job of keeping adequate space between people in the lineup and that really such lines are not any different than the lines we see at IKEA and CostCo (standing outdoors two meters apart for a length of time with strangers). In fact, I think the spacing between the two lines was better than I have experienced at my local Home Depot and IKEA. We can absolutely expect long lines during peak hours this season, and the more we approach the whole experience with a positive attitude, the more we will enjoy our season, and focusing on constructive criticism will improve safety for everyone. Riding L'Etoile to my first run of the skison! At the top of the mountain, skiers and riders were doing a great job of keeping space between one another, and the run was not crowded.

Conditions for the day are what we early season skiers come to expect: some good, fluffy coverage over patches of ice and granular snow. If you've skied the 70 Ouest enough, you know to stick to the edges to find the best snow. The top section was the best, with the middle being its usual scraped over icefest, and the bottom pitch had much better coverage than I had expected! As you descend the bottom pitch, you now have to veer to the right to get into the line, they have erected a snow fence along the bottom of the run in order to make room for the socially distanced line (for anyone not familiar, you'd normally cut sharp left to get back to the lift). 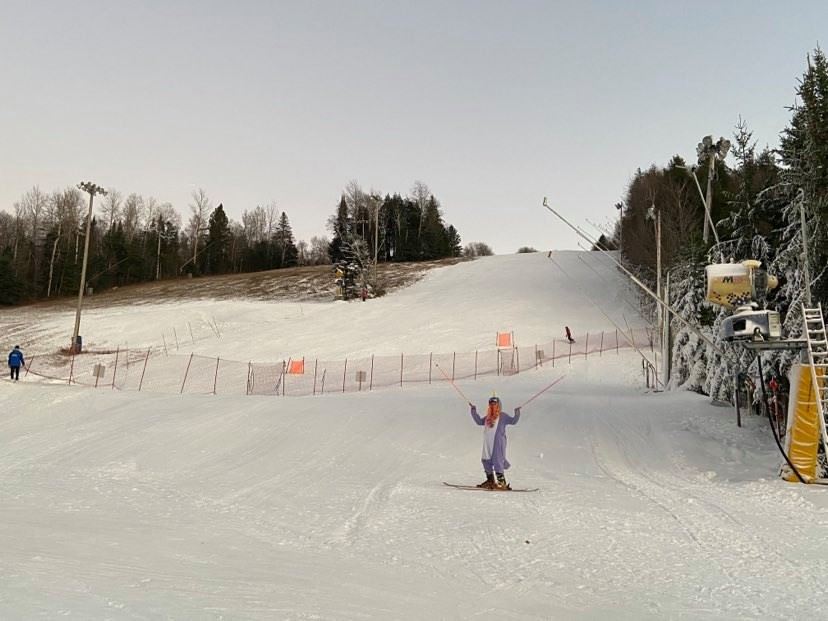 Here you can see the fence which helps direct skiers to the right into the line.

After my first four runs, my snowboarding buddy Ilana finally showed up with a new board in tow. She had used her legendary rock board for a few runs the previous day and finally concluded it was time for a new board appropriate for Eastern conditions. 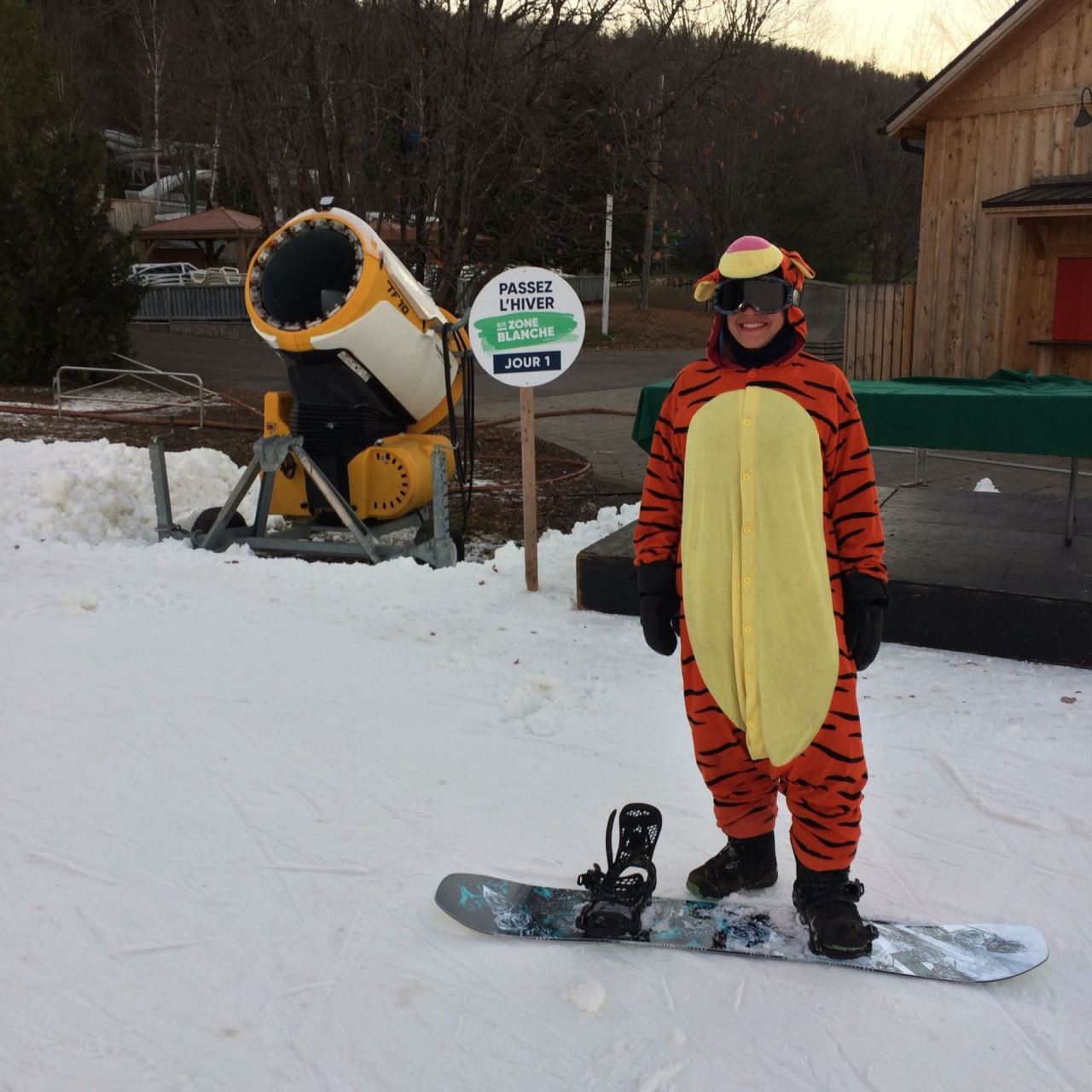 Ilana and her new Libtech!

We got in a few end of day chairlift rides together, with each of us at one end of the chair as required by the ASSQ regulations which require that skiers/riders living at different addresses must either ride solo or with 2 meters between them. At the end of the day, we took some socially distanced selfies, which allow us to be together while keeping two meters apart. 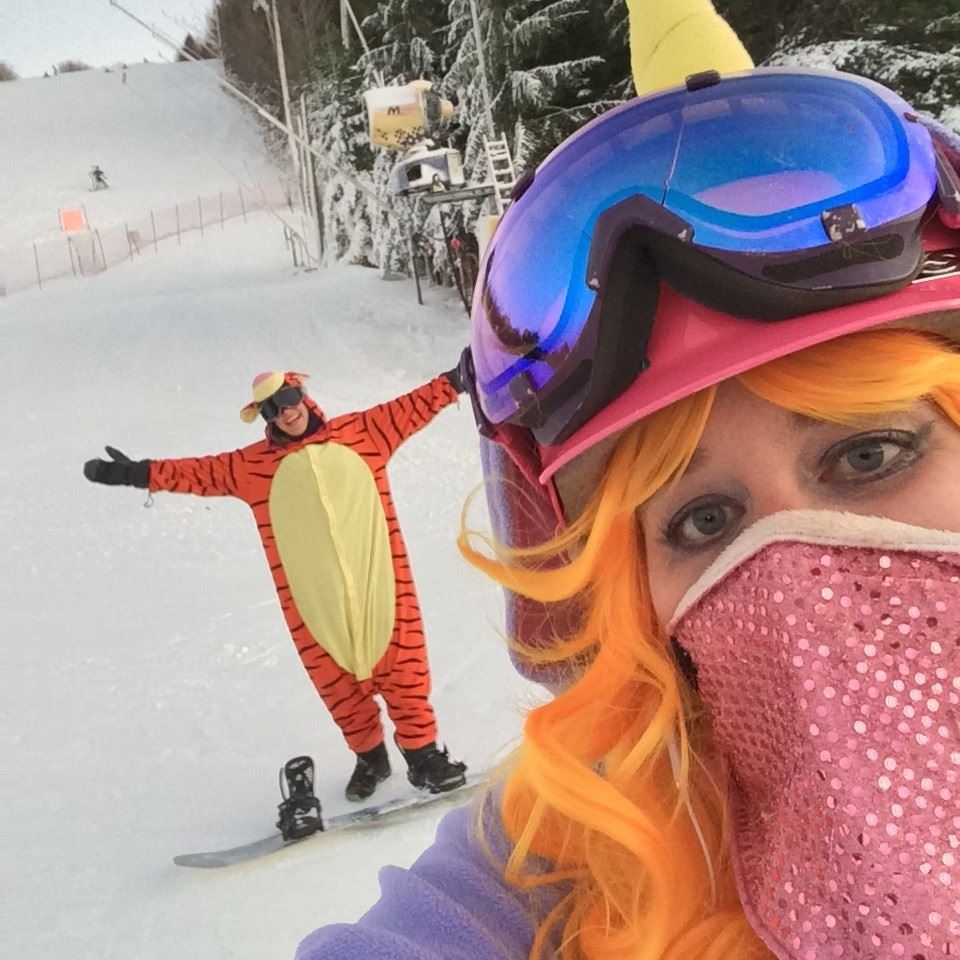 End of day selfie with Tigger! 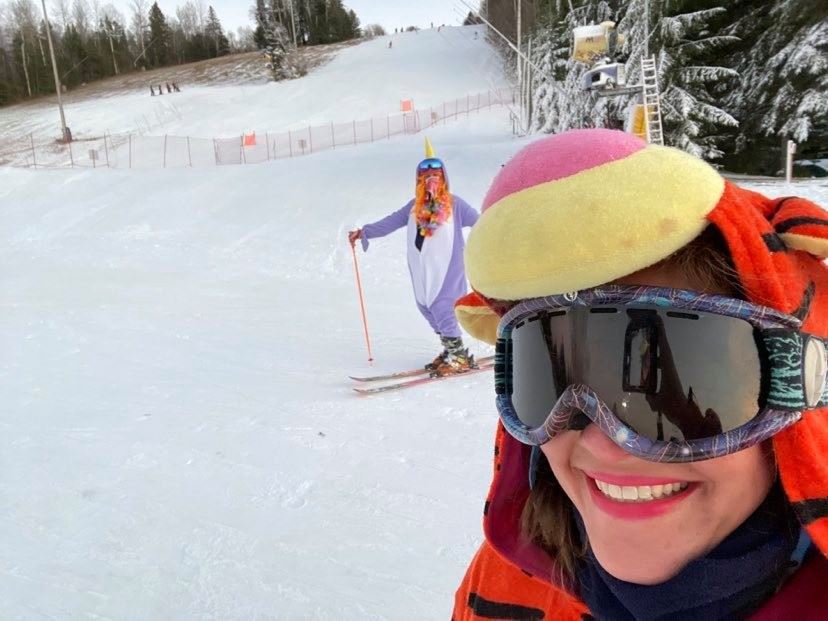 ...and reverse! You can see the last skiers of the day making their way down. We missed last chair but just moments.

Unlike other years (due to covid, of course), there is no après-ski on site in 2020, and it appears the MSS staff are doing a good job of sweeping people offsite at the end of the day. Lucky for me, we have a fully loaded bar at home and my partner Scott had dashed out to the dépanneur before my departure to grab two apres-ski Sapporos for my return so I was all set. I stopped on the way home to pick up some of Harbin Dumpling's wonton soup for an après-ski snack, and when I parked my car in the conveniently available parking spot right in front of our building, I was delighted to immediately fall into a roving Hallowe'en dance party - my very own personal après-ski party delivered right to my doorstep! Random neighborhood dj busting it out in the background at his mobile party! Meet my fiancé Scott who is literally a bear: here he is sporting his Red Panda look! It's almost as if the mobile disco was my own personal après-ski!

We capped off the night with La Capital Tacos and mango jarritos (Jarritos Mexican pop with tequila and chili flakes rim) and a little Hallowe'en party for two festivities. I could not have asked for a better kickoff to the Skison! Tags:
Sommet Saint-Sauveur
How to Layer for Skiing
2020-2021 Season - Quebec ski resorts get the gree...