With night skiing coming to a close in the region, a few friends and I decided to go night skiing one last time. We went to Sommet Edelweiss, as I had not been in 2 years, and always loved the Swiss Vibe, long runs, and fast chairlift of the hill. That Sunday night was set to be the last night of night skiing at the mountain. I initially was expecting a large crowd, due primarily because of it being a weekend, as well as it being the last day of night skiing. However, the fact the rain led to a last minute cancellation of the prior night’s night skiing, coupled with the warm and rainy weather in the Ottawa valley, led to the hill being almost eerily quiet. 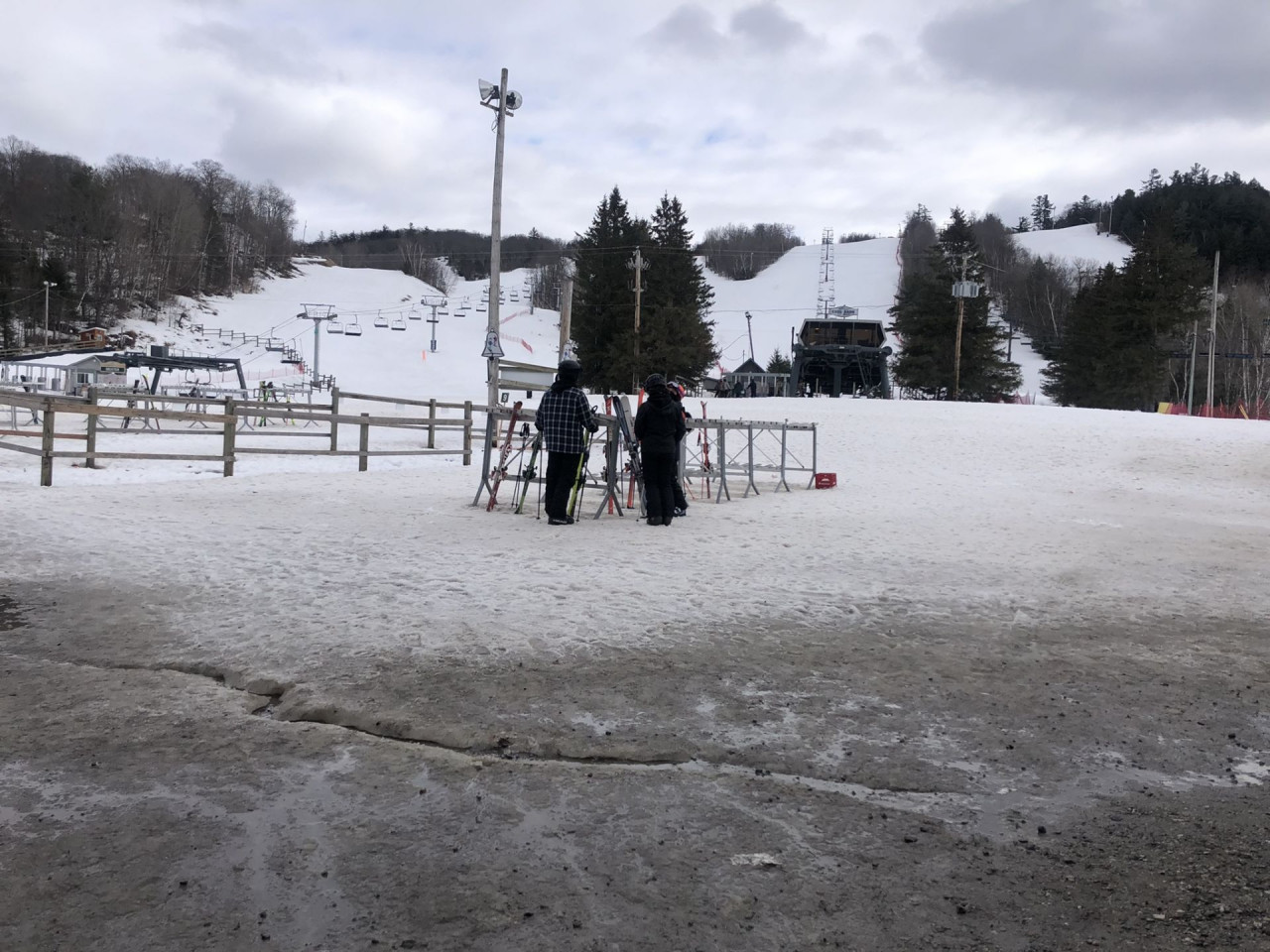 The conditions were extremely slow and slushy. Snow coverage was pretty decent, with all trails off the Edelbahn Express lift open. The black trails were the only ones with some dirt patches. We started with skiing Streif, then Shotgun, two of the hill’s steepest black runs. While one side of Streif had excellent coverage, it was my first time on shotgun (a natural snow trail), and the conditions there were fair to poor. However, I’ll take thin snow over ice any day;). 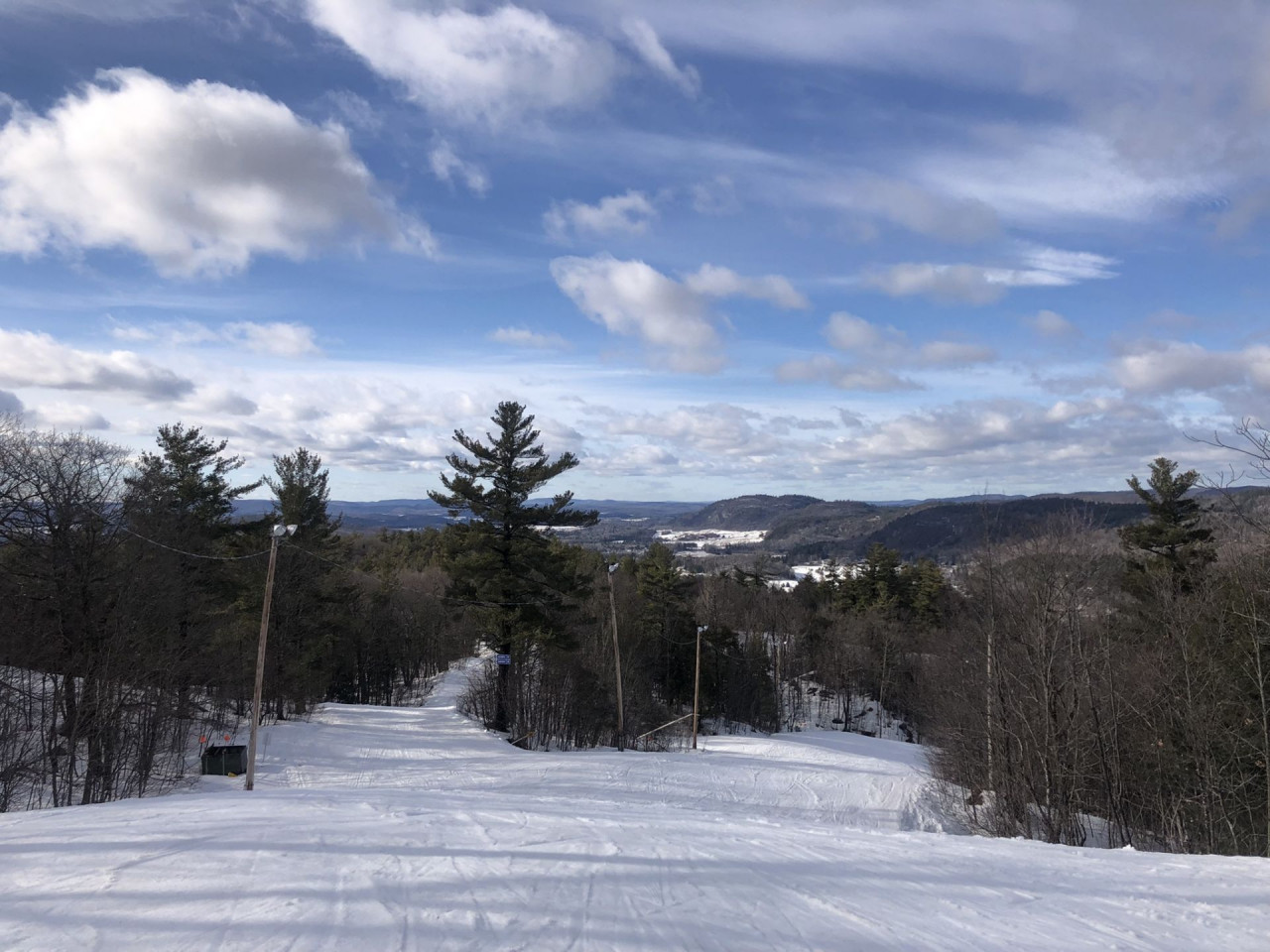 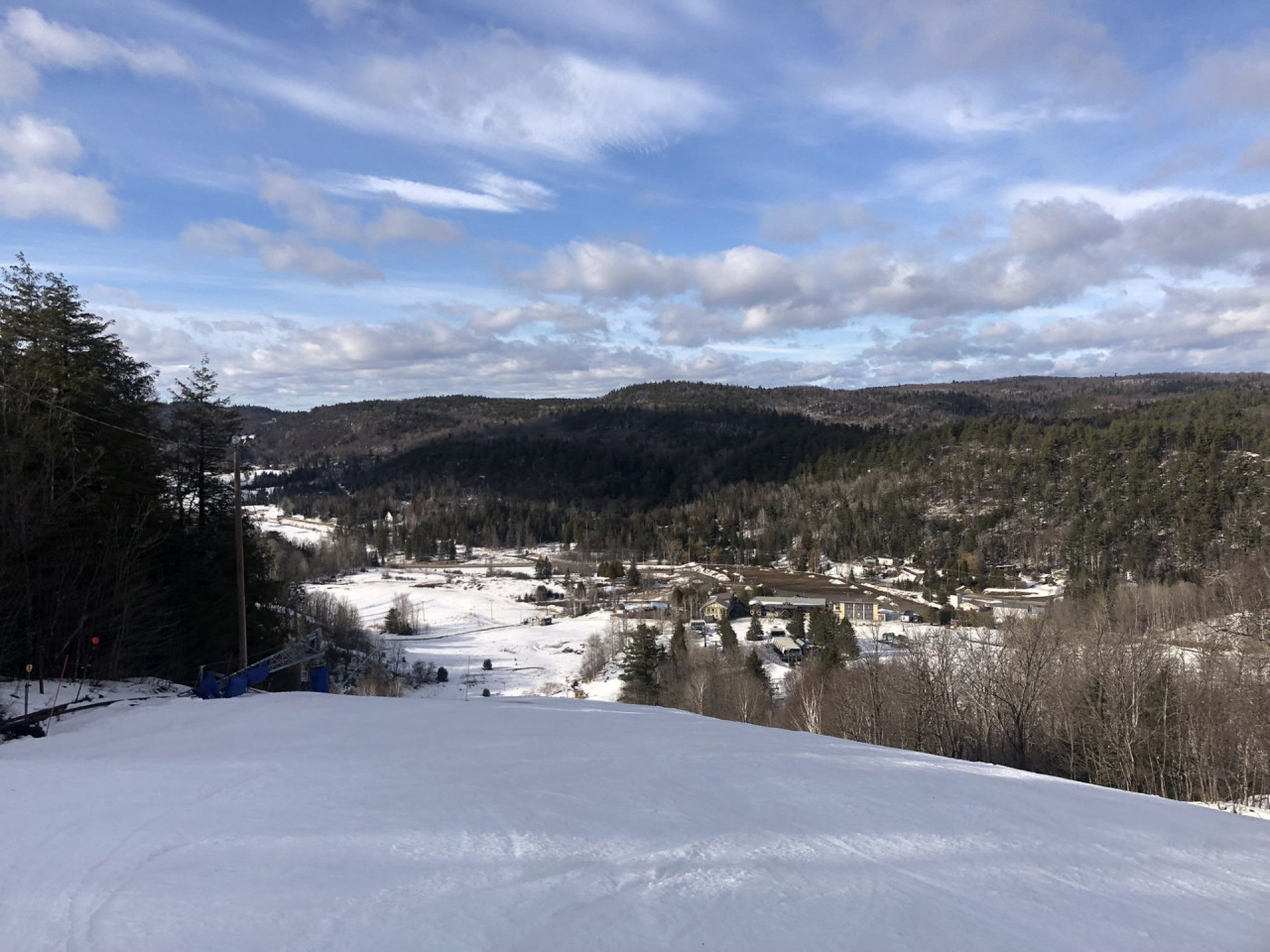 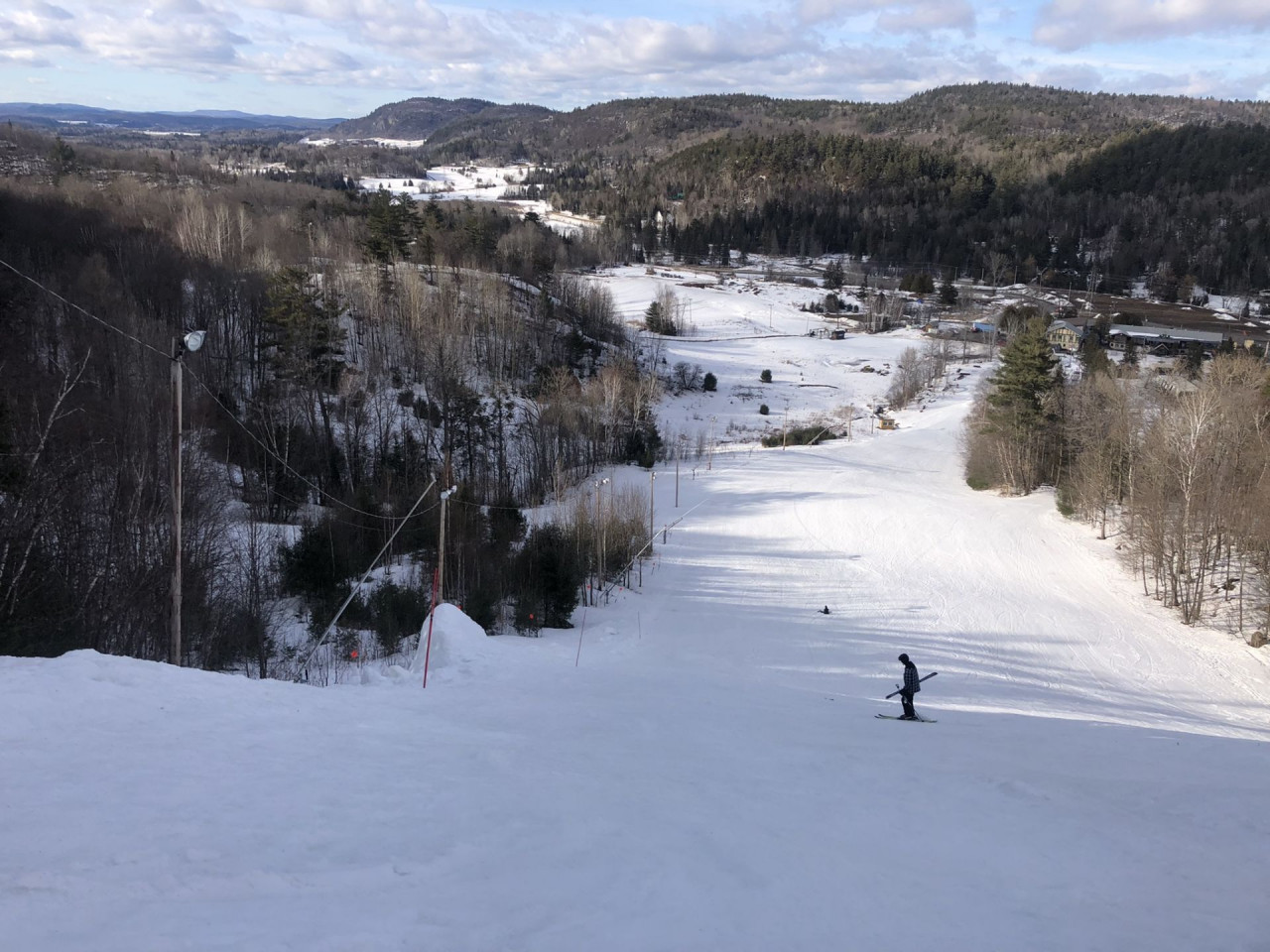 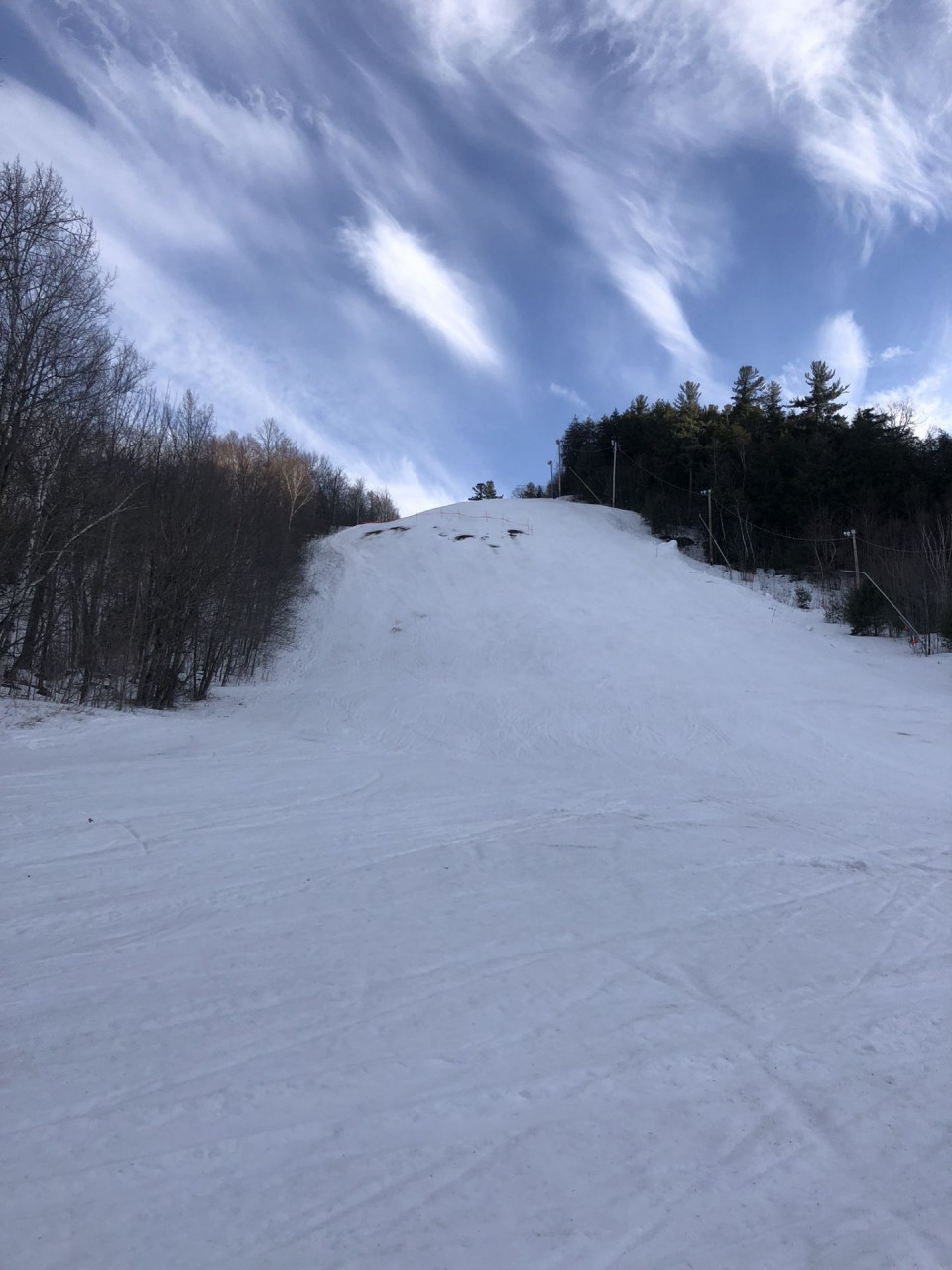 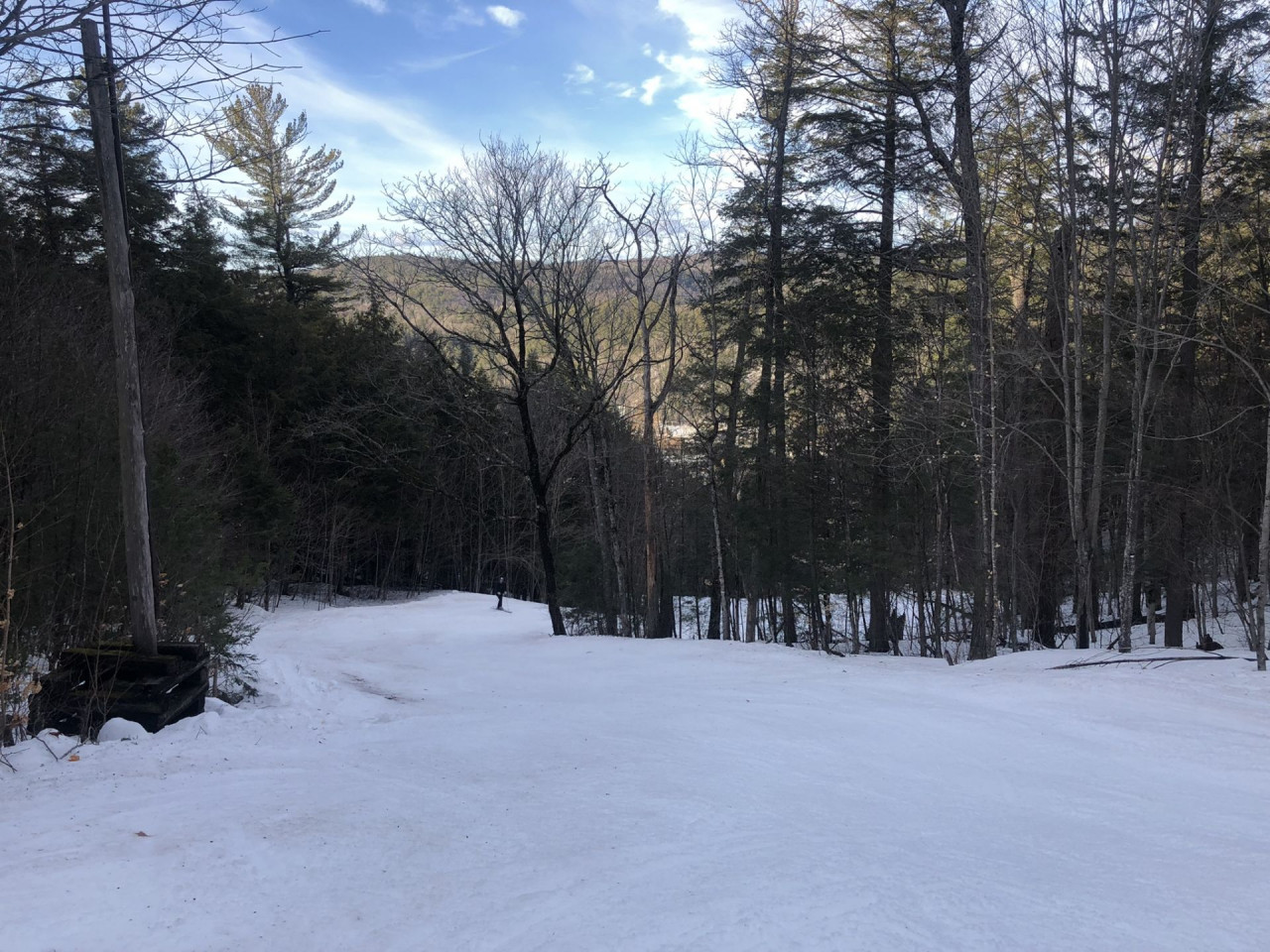 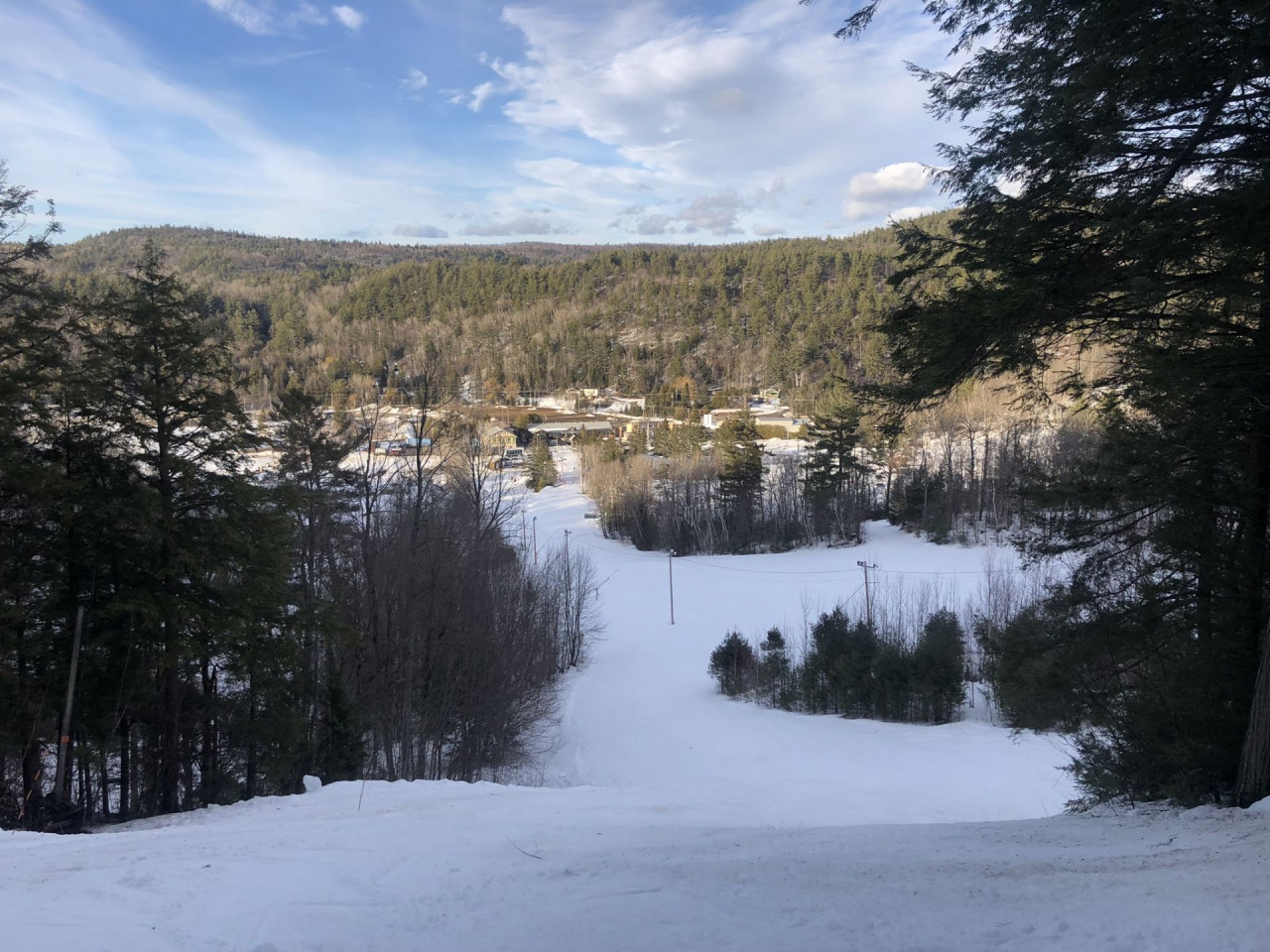 After skiing the black runs, we stuck with the greens and blues for the remained of the night. The slushy snow made for some perfect carving conditions. 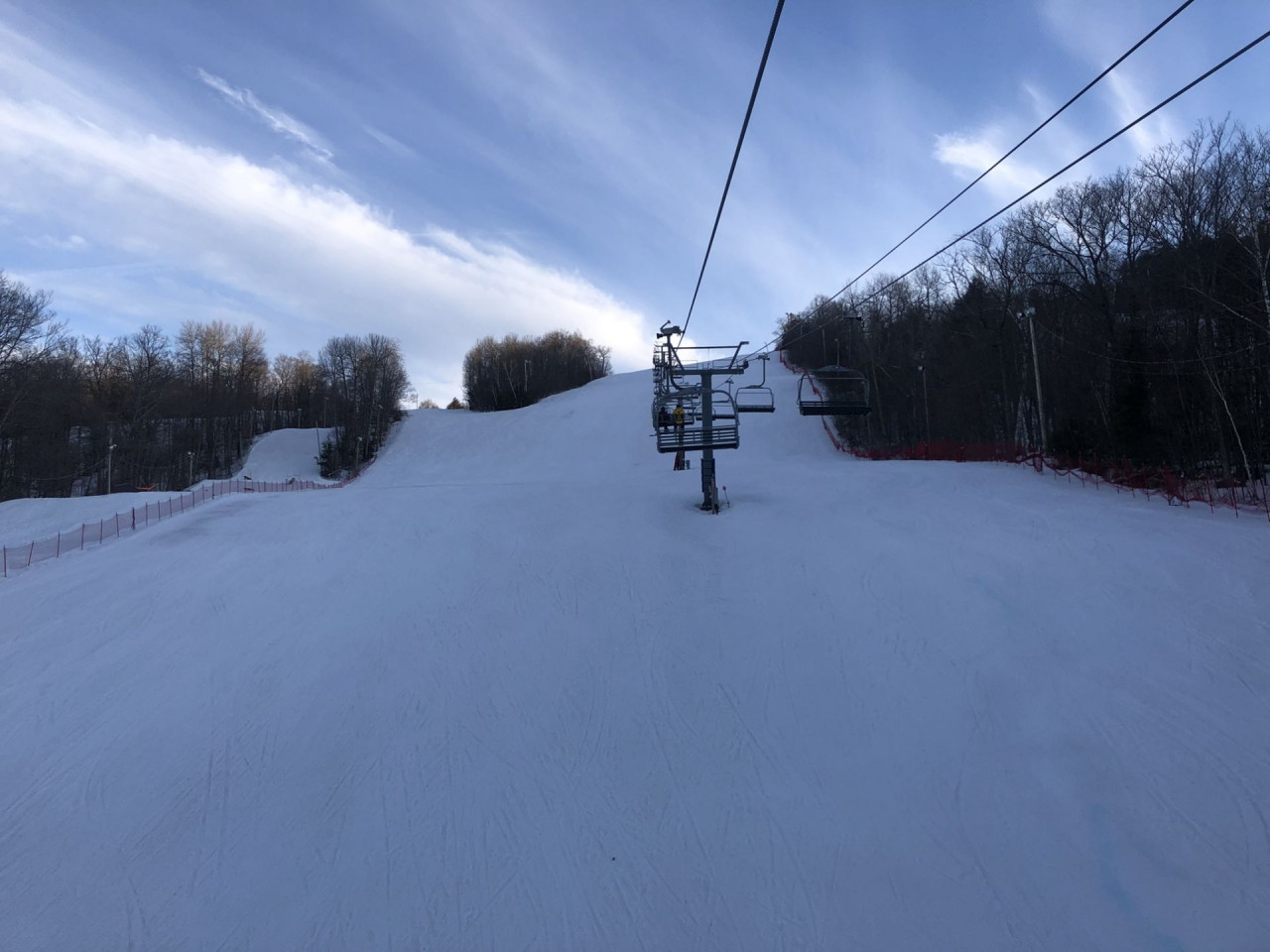 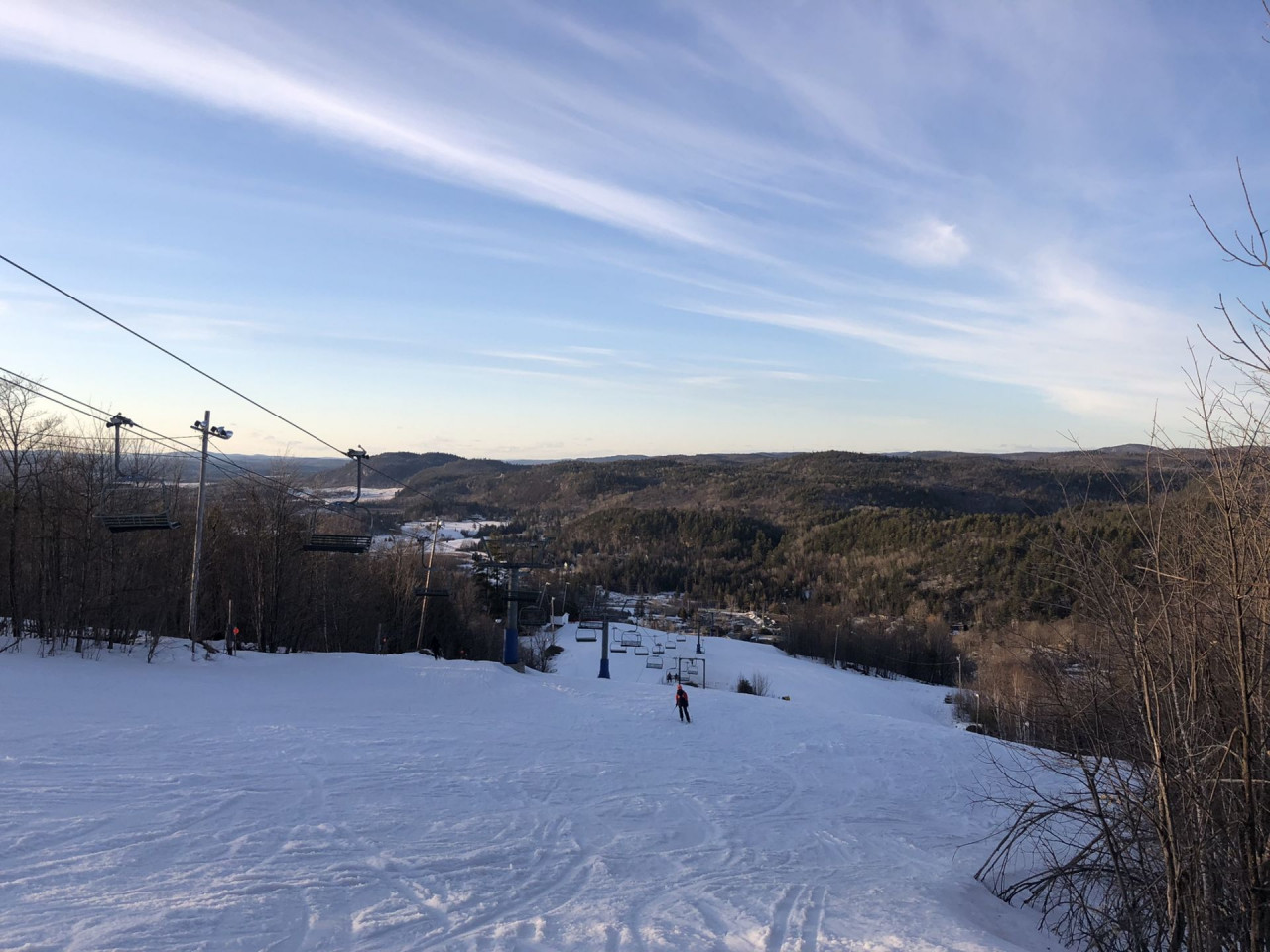 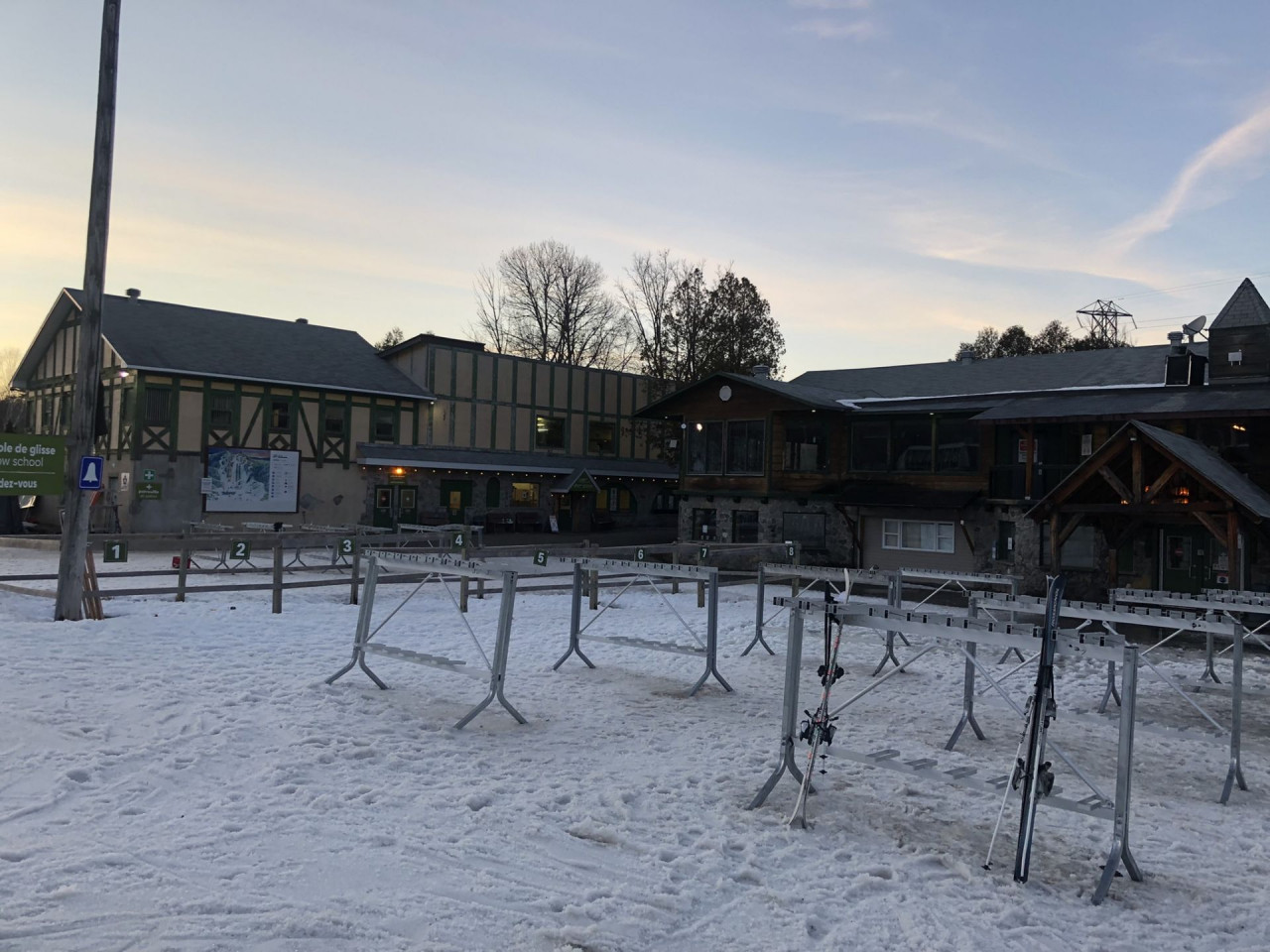 After taking a quick supper break at 7, one of my slight worries about the conditions was confirmed. The slushy, Spring conditions quickly hardened after the sun set behind the mountain…

The last two hours were very bumpy, and led to extremely sore muscles/joints! The conditions were likely my worst this season, with the slushy grooves becoming icy grooves that shuddered and jolted my skis and body around. Not to say we didn’t have a good time. As the beautiful sunset faded, the night lights were switched on. 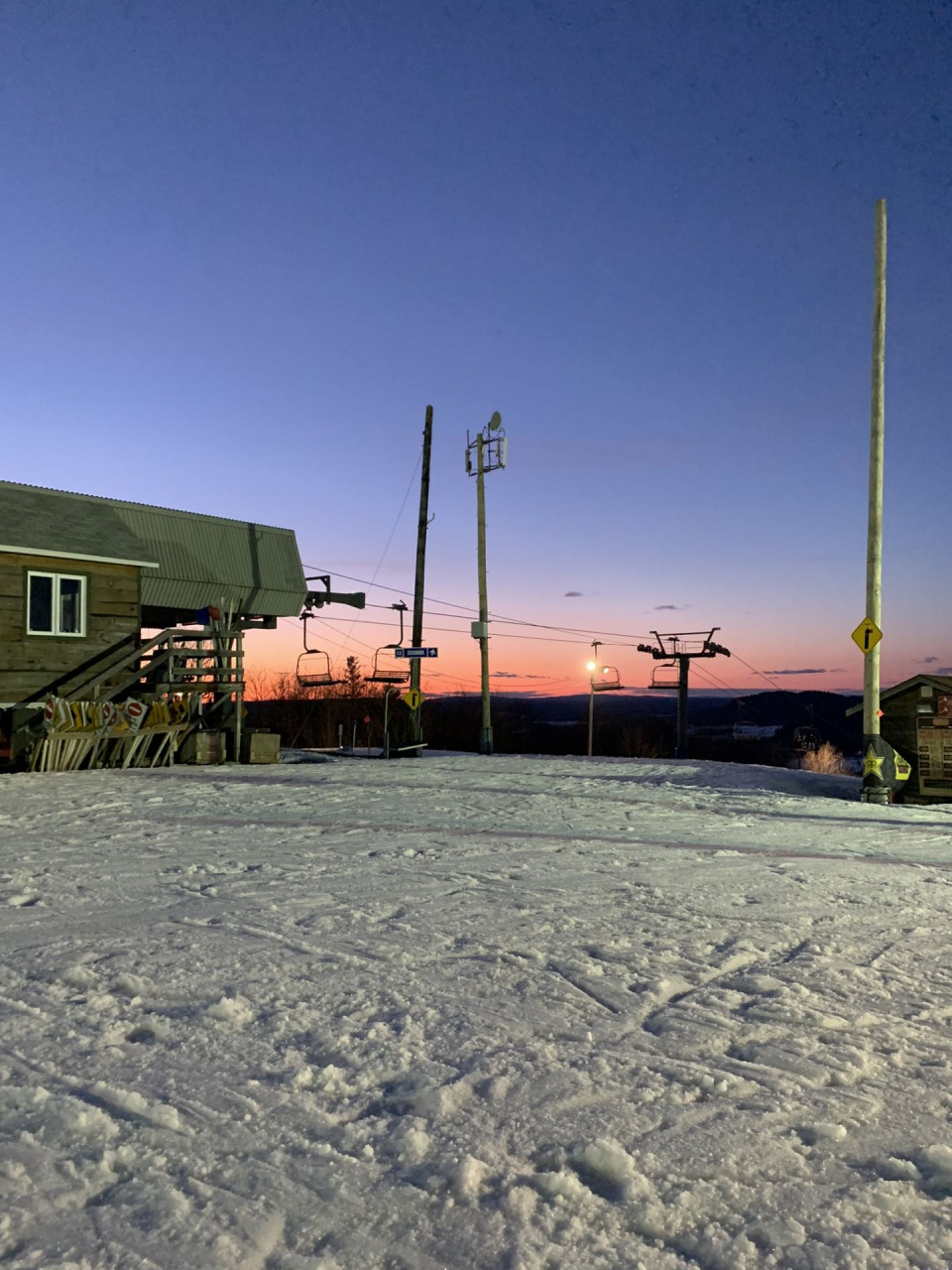 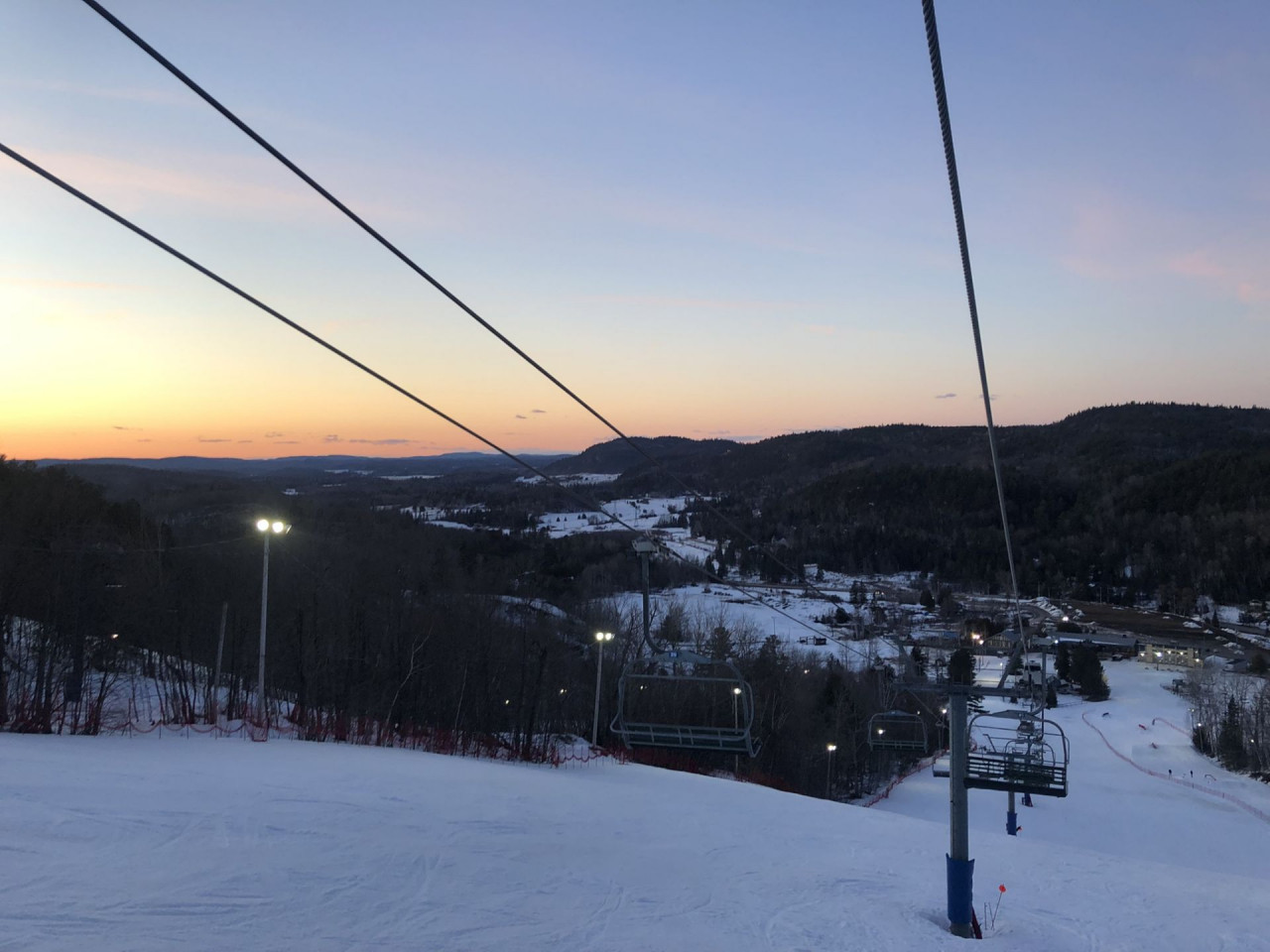 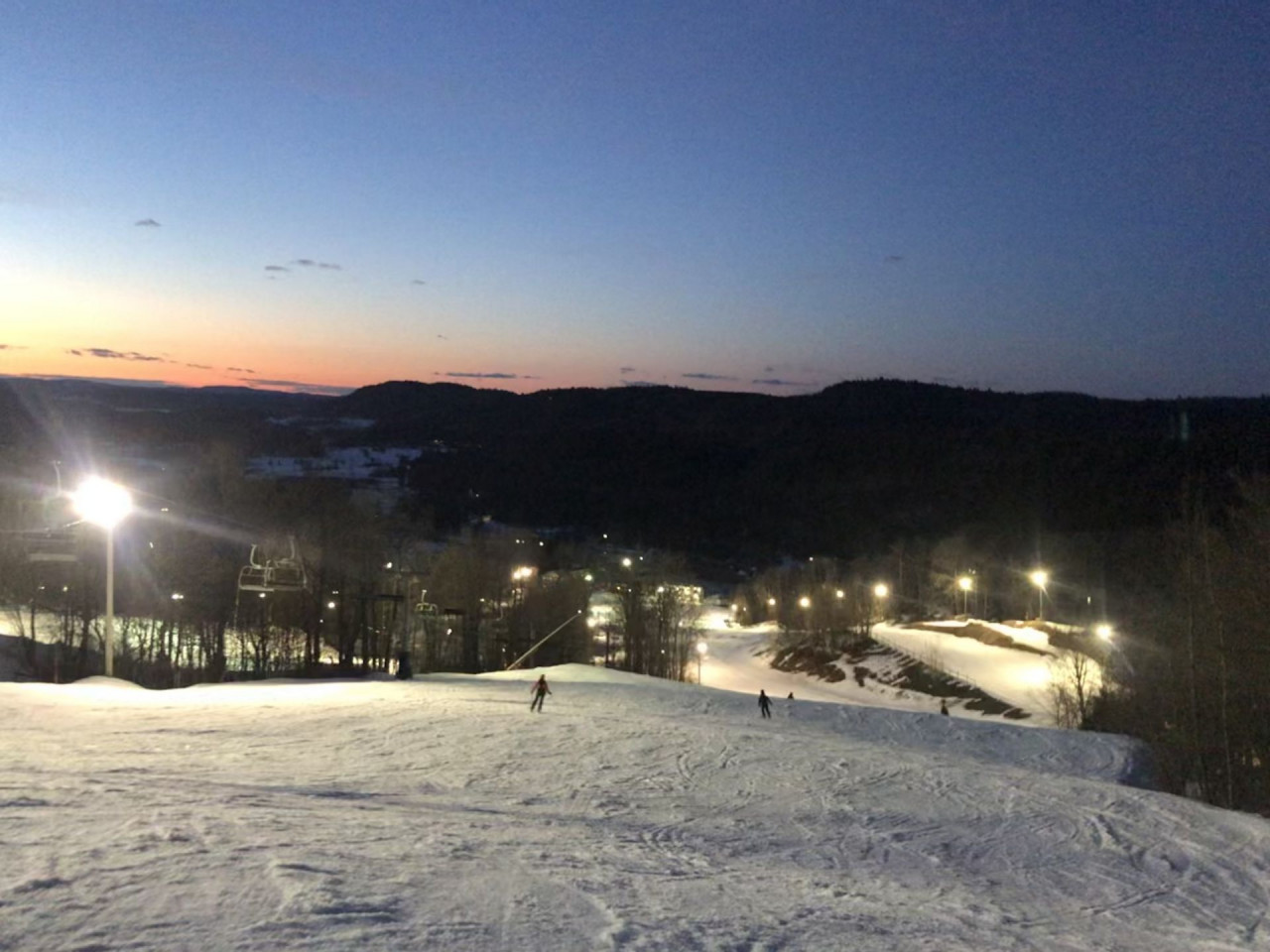 To cope with the hard and bumpy conditions, we stuck to the green cruisers, and took our time descending. In all, we still managed to ski nearly 20 runs in 4 hours of skiing, breaks excluded, (the most this season), thanks to the high speed lift. Throughout the afternoon and evening, less than 30 cars were in the parking lot (similar to my opening day experience at Pakenham), leading to no lift lines and runs to ourselves. We left at 9pm, glad despite the conditions that we were able to night ski on the last night of this amazing season. Cheers

Shane Séguin
#44
This comment was minimized by the moderator on the site
Nice report Matteo. Have you ever checked out the "unofficial out of bounds" glades off near Shotgun? If you go towards DNF near the top of Shotgun and then go in a bit and head down the trees to the right, the glade is fairly interesting. Some drops and whatnot but nothing too difficult and the obstacles are easy to get around.

I just love Shotgun, the zig-zagging is a load of fun. Too bad the trail has a tendency to be a bit on the scrapy side of things compared to the rest of the mountain (despite there being significantly fewer people skiing it.
Shane Séguin

Matteo C Author
#46
This comment was minimized by the moderator on the site
Looking at the pictures again, I think he was able to ski through the glades, albeit slowly, but the others we met must have kept going down that straight path in the image to access the 'unofficial' run
Matteo C

Shane Séguin
#47
This comment was minimized by the moderator on the site
If you continue through that narrow area, you will arrive at the old DNF trail (or Tommy Pic) which was a double diamond. Very steep and a bit rocky. No longer an official trail and it is not groomed and is now considered out of bounds. I've never done it but those that have, have told me it is fairly steep and a bit challenging with natural obstacles hidden under snow, in other words, at high risk. The glade before DNF and between Shotgun isn't too bad though luckily.
Shane Séguin
There are no comments posted here yet
Leave your comments