With the forecast for the next couple of days not being the best it could be, I decided to take advantage of a sunny day to head down to Owl's Head. I woke up to a beautiful sunrise, and I left Sherbrooke at 7:15 for the hour drive. I arrived at the mountain at a touch after 8, and got ready to roll. Got my RFID card reloaded then it was go time! The lifts opened at 8:30 with the Main Quad, Baby Quad and the Magic Carpet. I had heard news that the new Lake Quad was to open later in the morning. One of the main reasons for heading down there today. There were 16 announced trails open. The temperature was around -8 and no breeze, so it made for a comfortable morning. The first rides up the Main Quad were to ski Lilly's Leap, Centennial, and the Crossover to the Lower Standard. Shady Lady was also open, however the Blue Chair was not spinning. The conditions were of a fine machine groomed granular over a hard base. Coverage was pretty good all over. There was a little inversion happening today as the peak of the mountain was gleaming in the sunlight while the base of the mountain was a little fogged in.

The View Down Lilly's Leap: 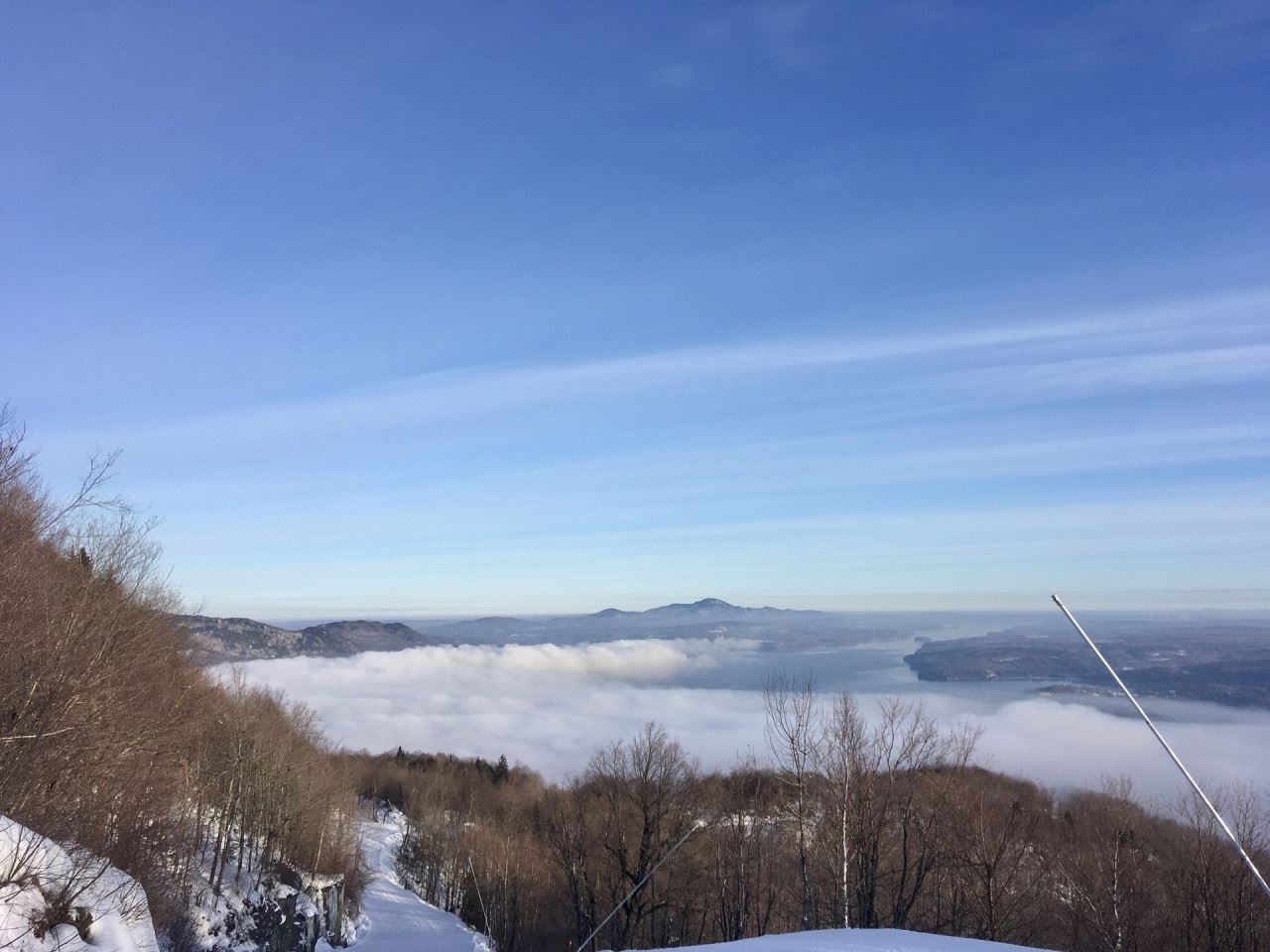 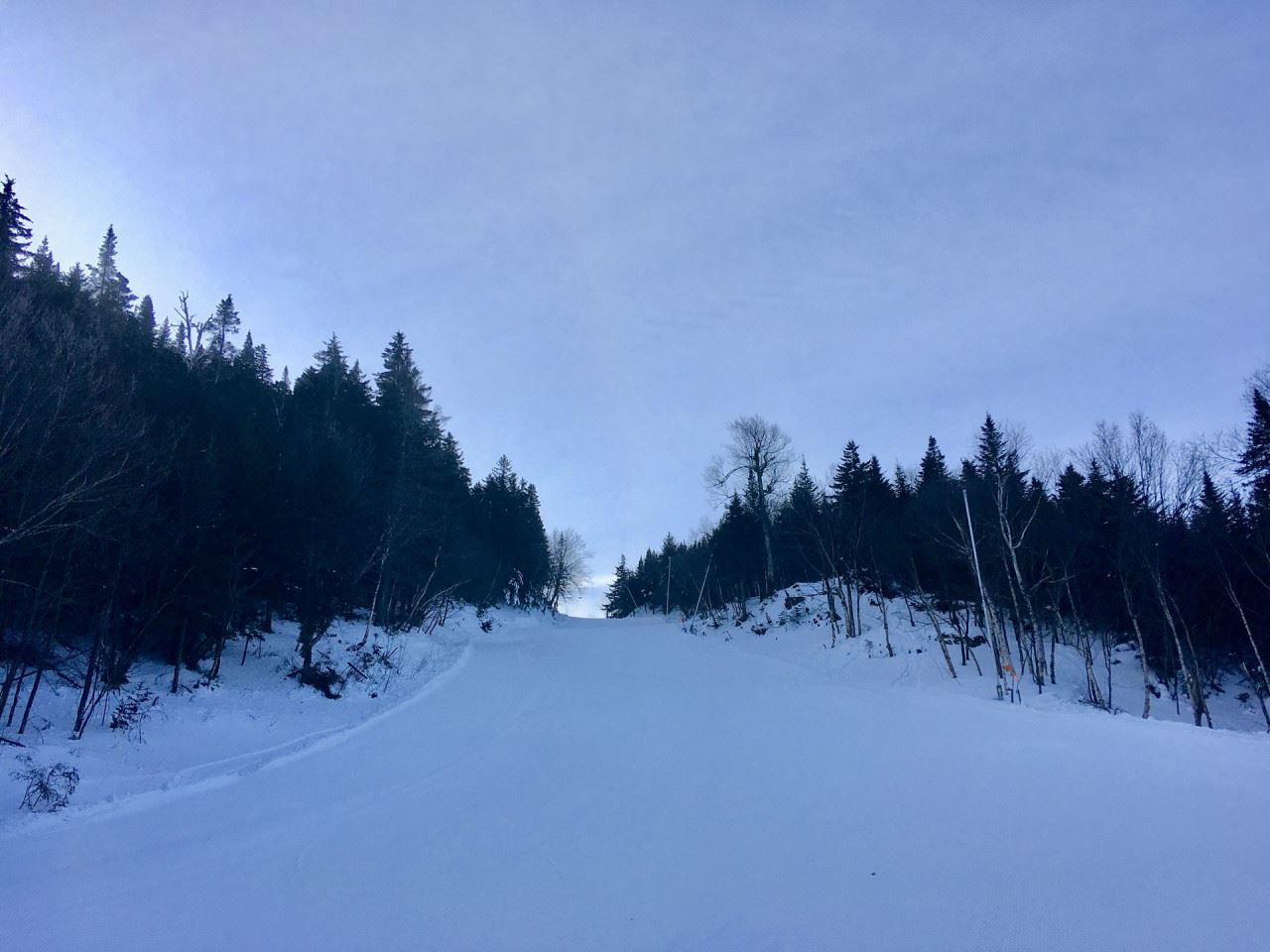 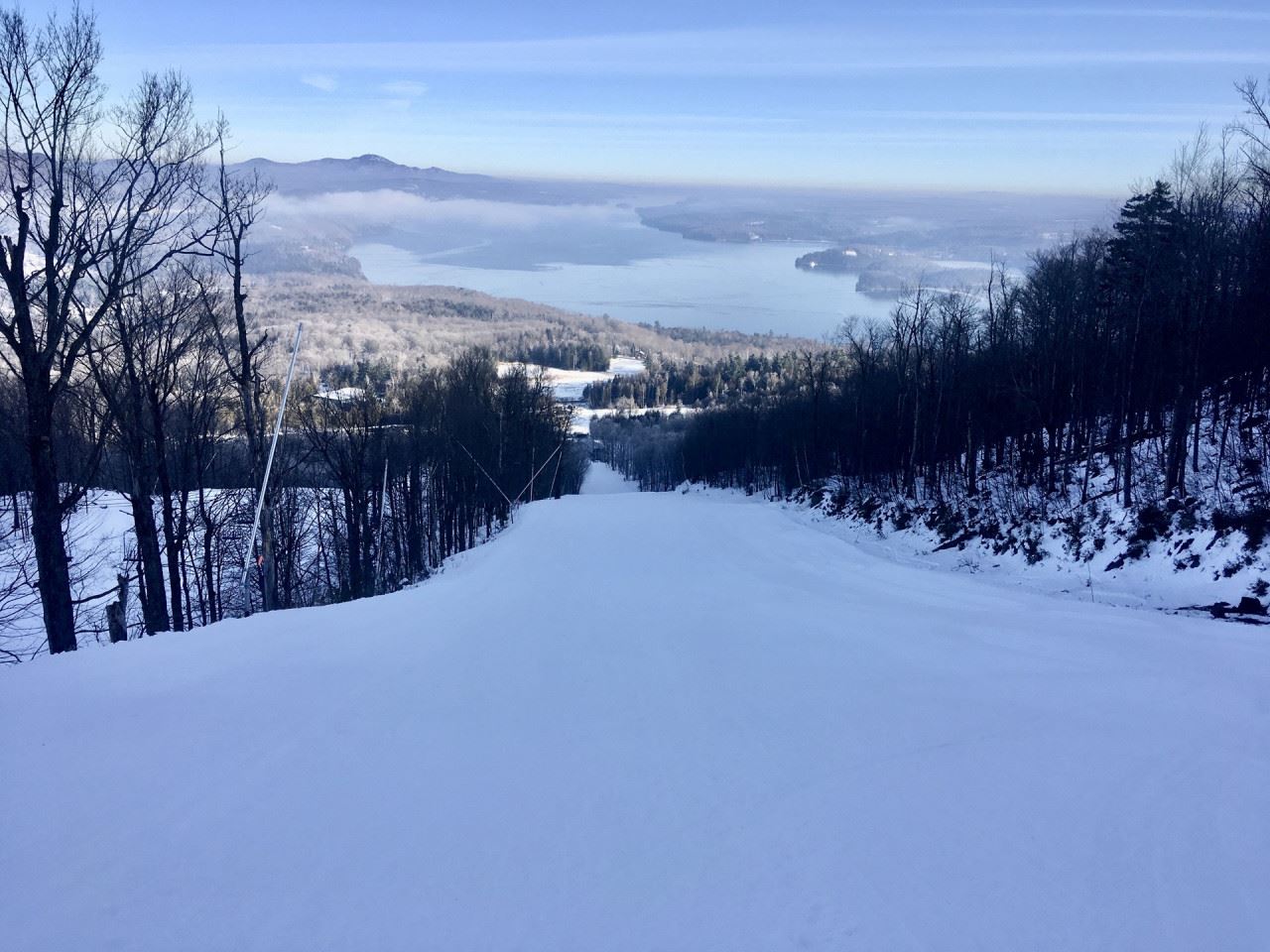 After the first couple of warm up runs it was onto the upper sections of Korman's Dive onto the Kamikaze. At this time I was about to take some pics of this section, my phone froze from the chill and died........was not impressed. So I headed down the mountain to the chalet and head to the car to warm up the phone and get a charge into it. When I arrived at the bottom, I had the very pleasant surprise of running into an old buddy of mine Jeff, who had worked at Owl's Head at the same time I was there. He and his family were there as well. His dad was my Grade 6 teacher! We all frequented Glen Mountain back in the day when it was opened. After a chat, and a bit of catching up I headed off to the car to get the phone back up and alive. Then it was back up the hill to get the shots of Korman's Dive and Kamikaze.

The Middle Pitch of the Kamikaze with Korman's Dive in the Distance: 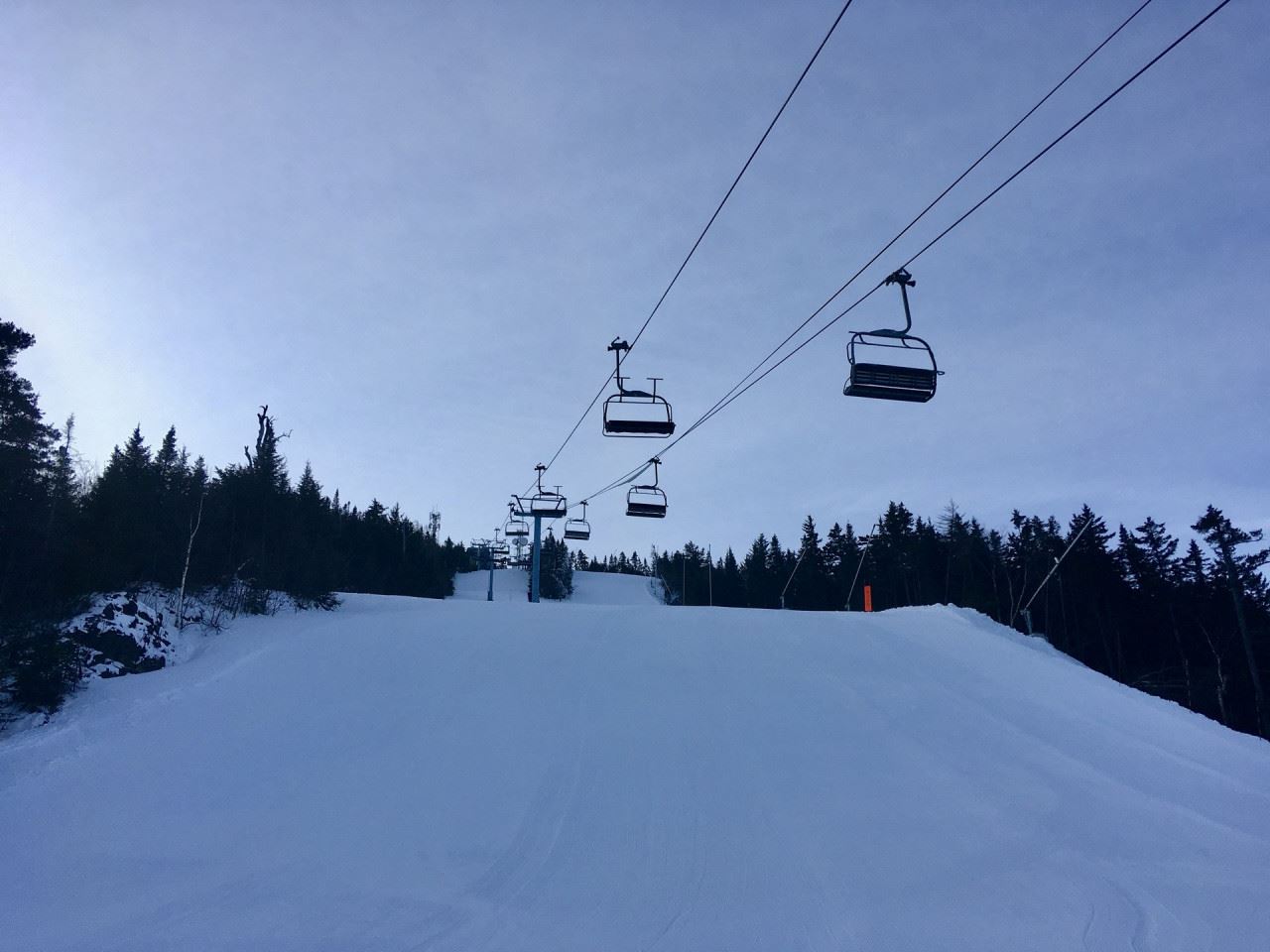 By 11:00 I noticed that the rope had been dropped on the Traverse leading over to the Lake. The New Lake Quad was open! The latest in the long list of projects that Owl's Head has on the plate for the next little while. A lot of people were waiting for this day! The Upward trail was of groomed made made snow over a firm base. Pretty good coverage with a few touch ups to be done. Other than that it was fine. The loading area of the New Lake Quad is situated on the end of the flat where the Couloir trail exits on to the Upward Trail. The last pitch down into the bowl where the old Lake Quad started is now lost, and no longer accessible. The new lift has a loading carpet. It was time for the first rides up the new lift. The ride up is nice and smooth, and more comfortable now than it once was. I managed to catch up with Jeff's mum and dad, his sister and husband for a couple of runs. 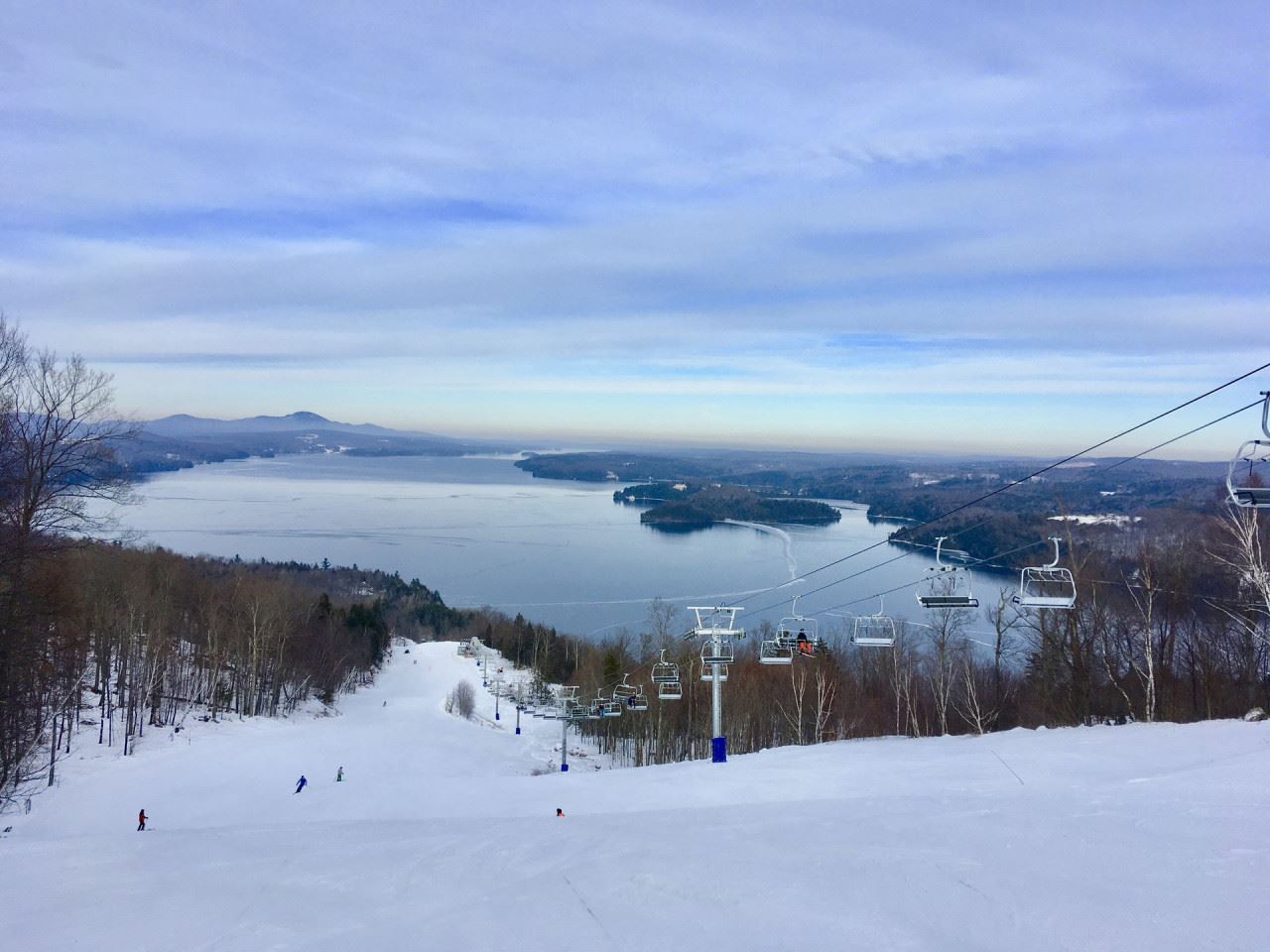 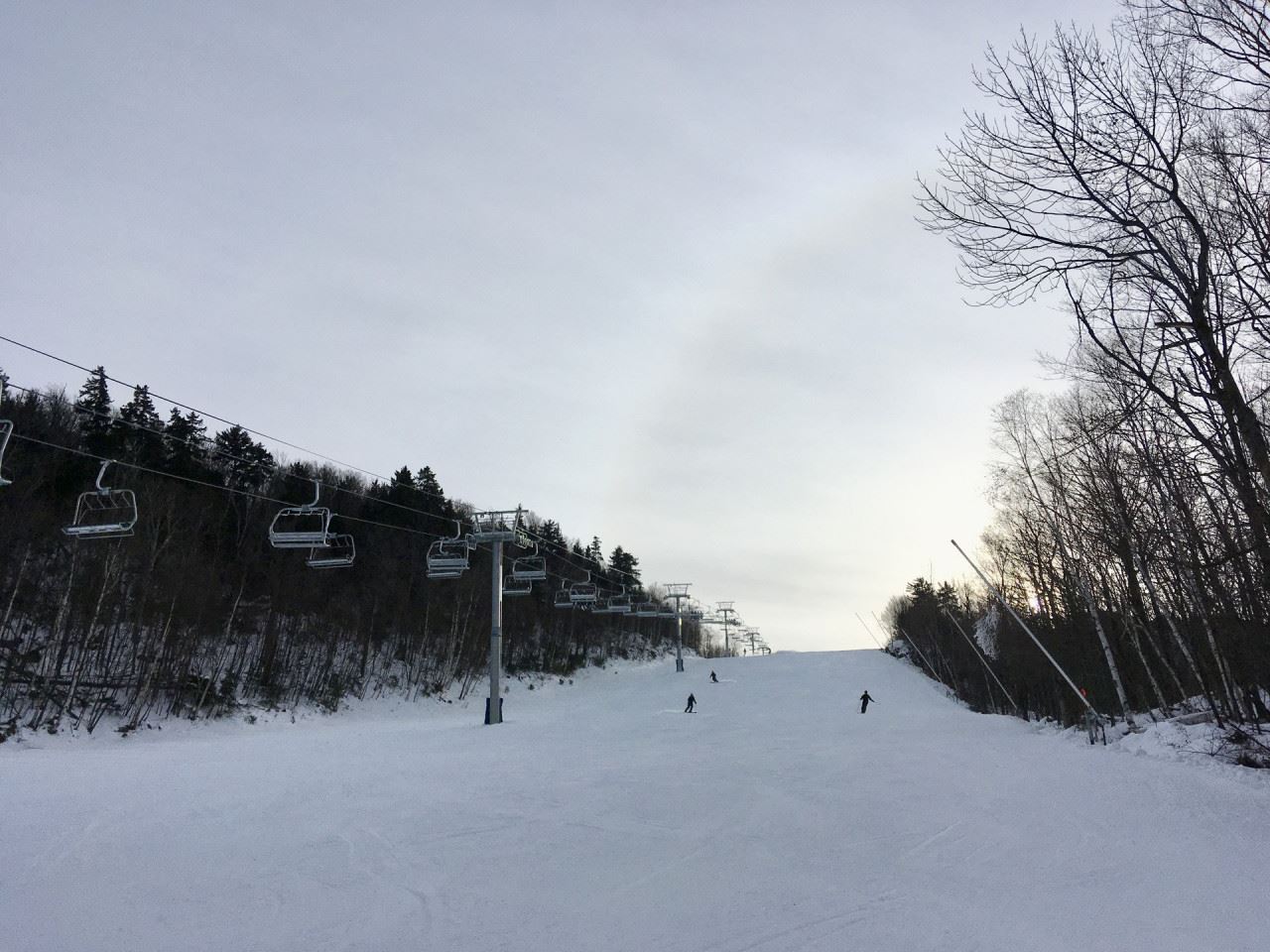 The Lower and Upper Stations of the New Lake Quad: 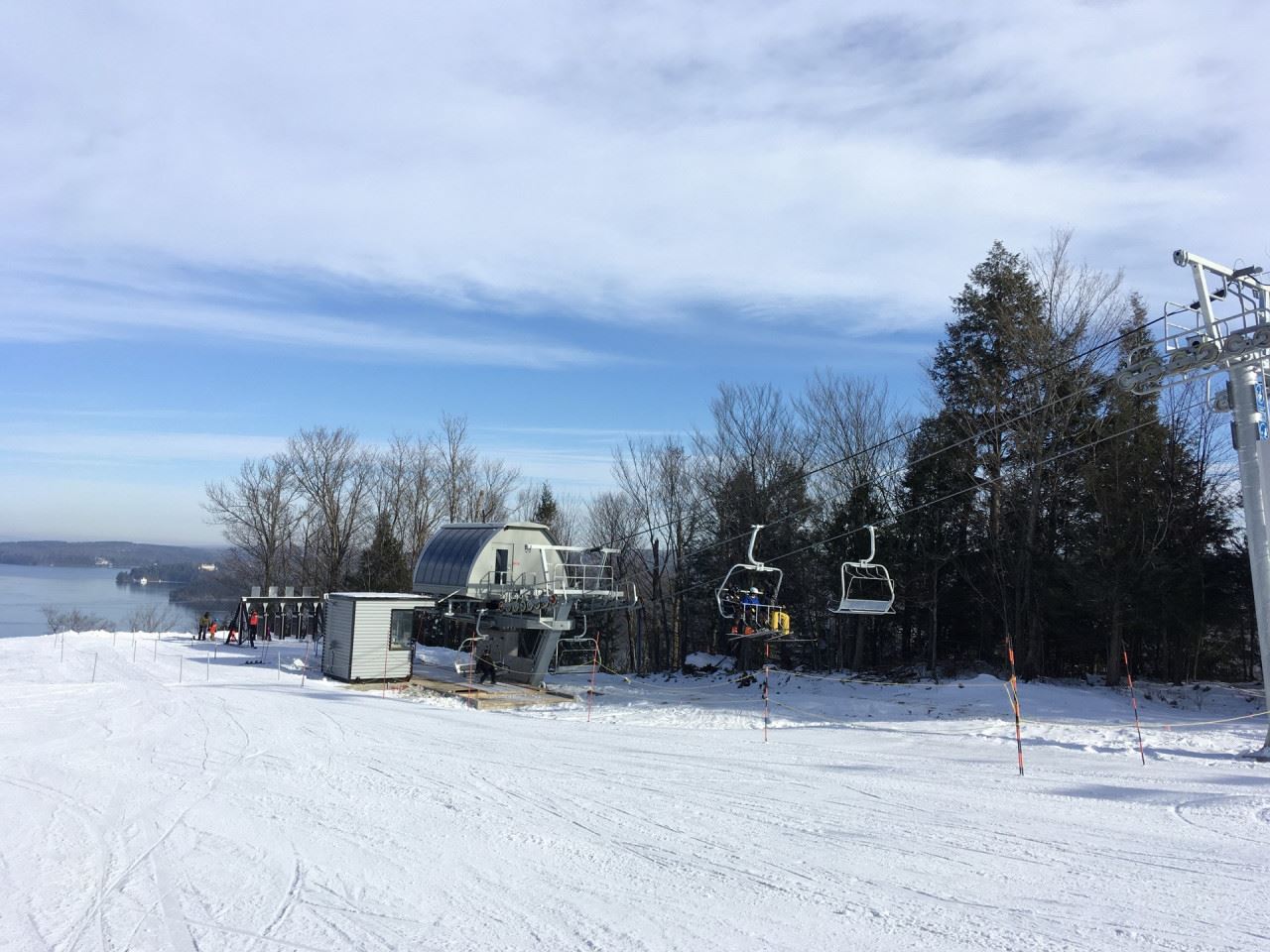 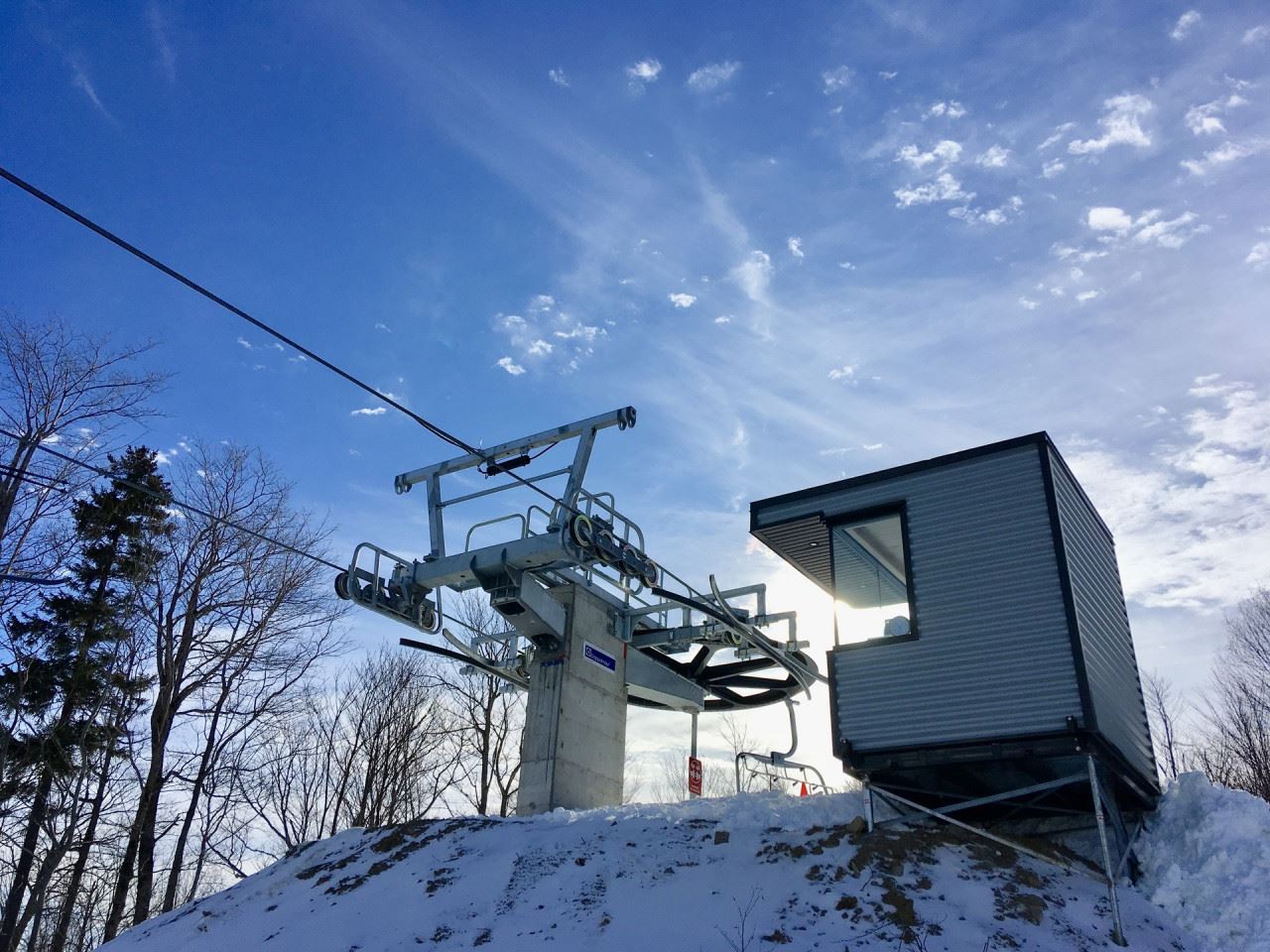 By noon it was time for a break, and then it was back out for the last runs up the Baby Quad, over to the Main Quad for the last run down Lilly's Leap, and over the the Lake for one last ride. The day ended at 2:00 as the legs were telling me they had had enough. Today was a great day of skiing seeing some people I had worked with back in the day. The conditions were pretty decent considering the weather we have had in the past couple of weeks. Coverage was good, and nothing poking through the snow to run over. Highlights of the day were running into Jeff and his family, and riding up the new Lake Quad. Well worth the early departure from Sherbrooke. It's still early in the season, and it should only get better. Thank you again Owl's Head for another great day of skiing!

Some More Scenes of the Day: 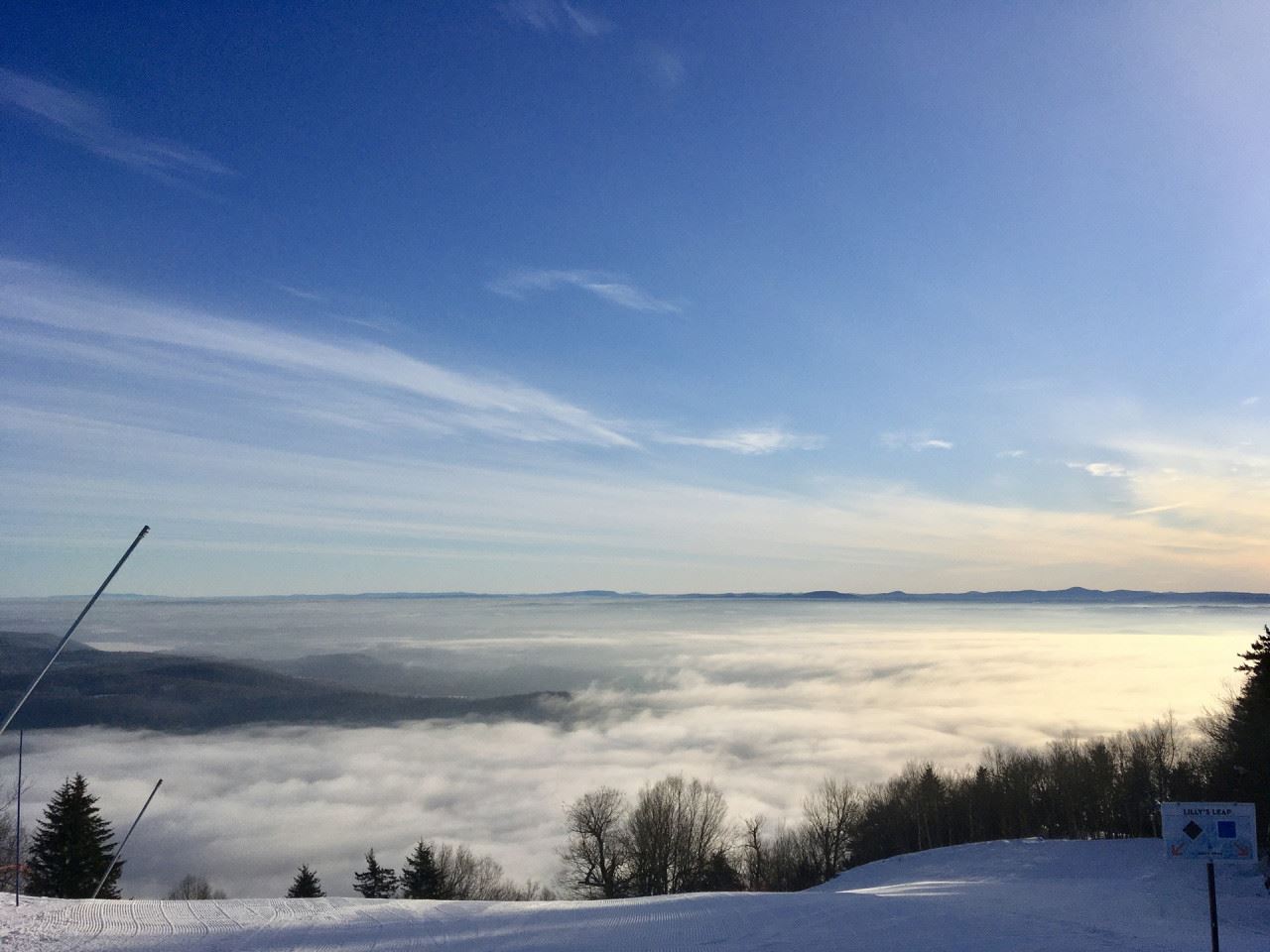 This Scene Never Gets Old! 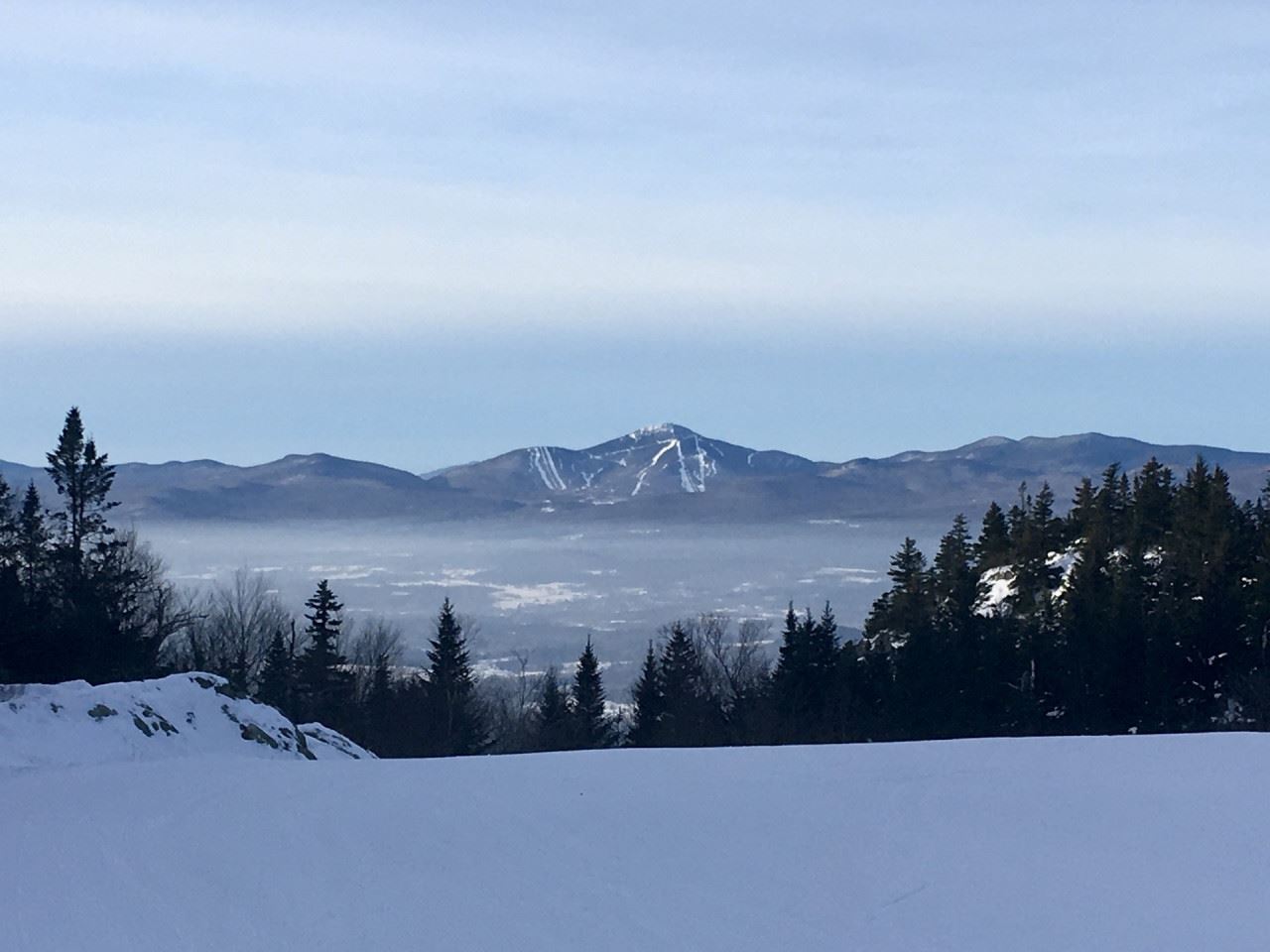 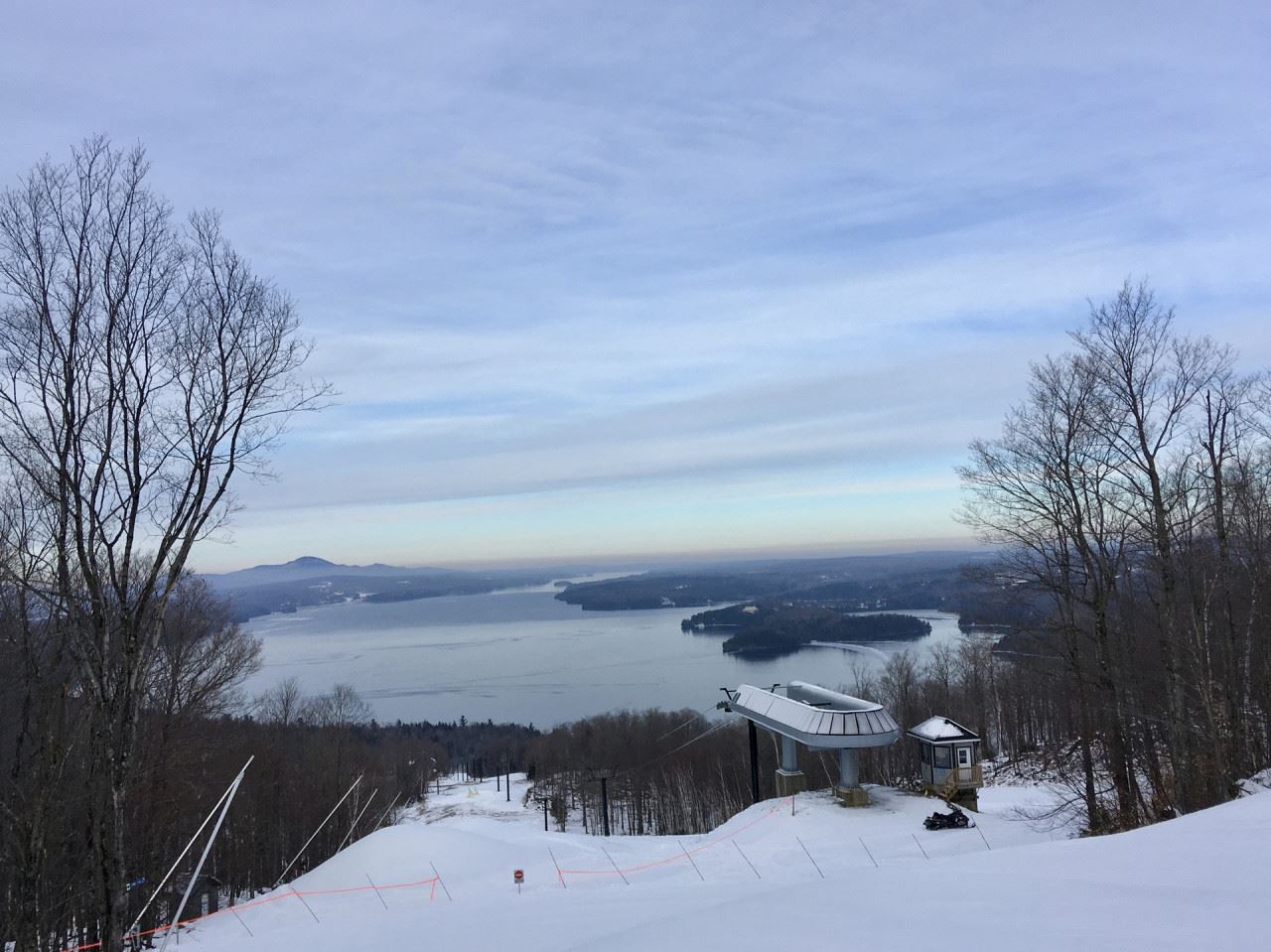