Well my 2020-21 ski season has begun....finally! The weather recently in the Townships has not been the best, and upcoming weather reports aren't any better. So off to Mont Orford this morning for a few early season laps. I arrived at the mountain at 8:15, and it was already getting mild with a temperature of +2 degrees, and skies were partly cloudy to start. With the new Covid protocols in place, we are required to dress, and boot up at the car. Access to the chalet is limited for 15 minute breaks. Masks to be worn in the lift line, chalet, and on the lifts. Outside on the terrace there were a few spots where there are fireplaces set up with a couple of places to sit and relax. What was pretty cool was that they had was a shipping container converted into a serving area for drinks and other items you could purchase without having to enter the chalet. The terrace was set up nicely to have a break. Now onto the skiing. 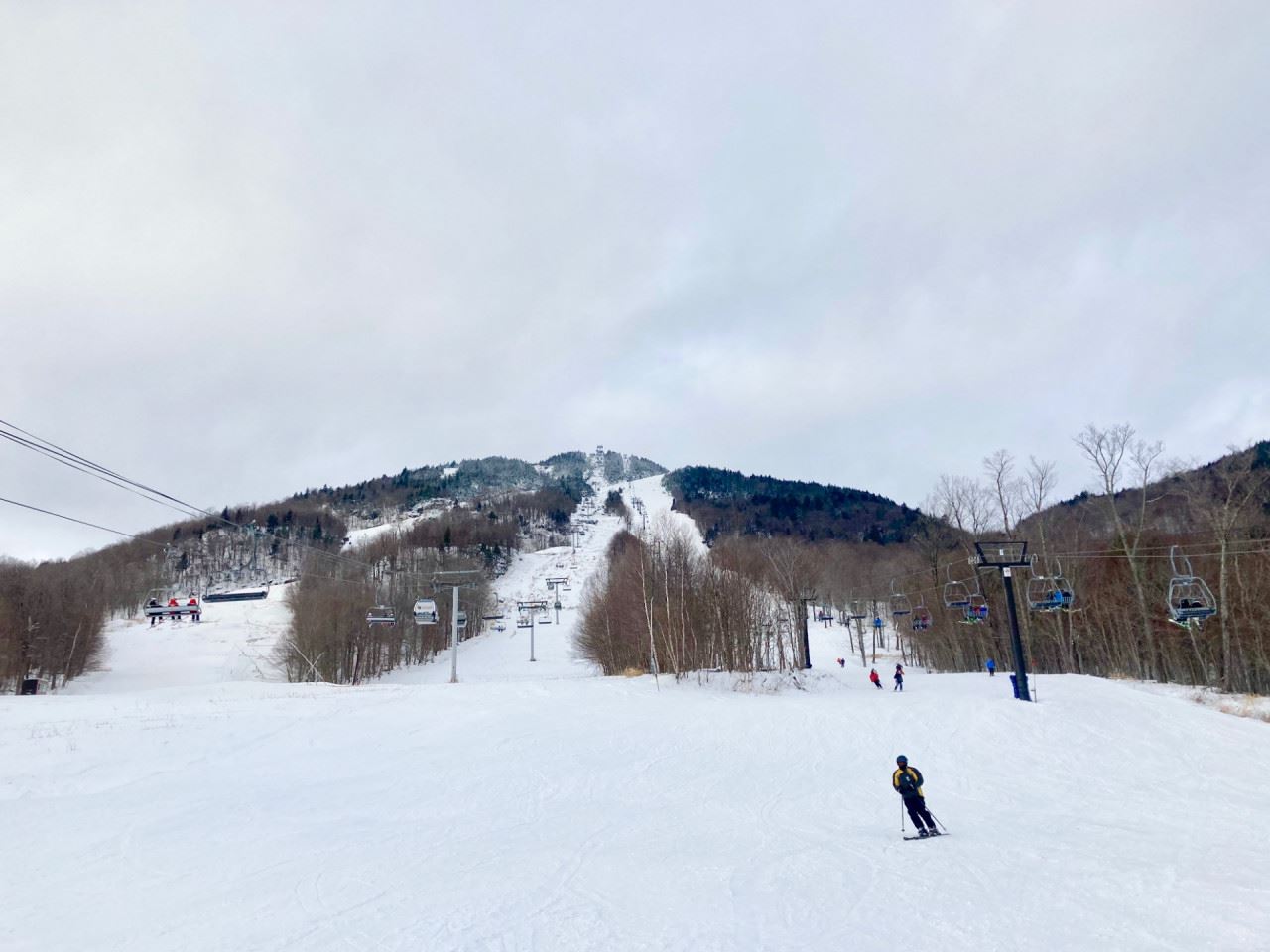 There were 5 trails available with The Giroux North Quad, The Hybride, and the Rapido Triple, along with the Double Magic Carpet in operation. The first runs of the morning were on the Giroux North Quad and the Familiale trail, a nice and easy route down. On the Quad you were loading two per chair, one person at either end, of four with the same household. The conditions were really nice with groomed man made snow along with a nice blanket of snow we received the night before. The coverage here was really nice. It was noticeable as it was getting milder that the snow was starting to transform into some nice snowball making snow. Nothing slushy or granular like you'd find normally during spring skiing. It was actually quite forgiving, and made for some nice turns. 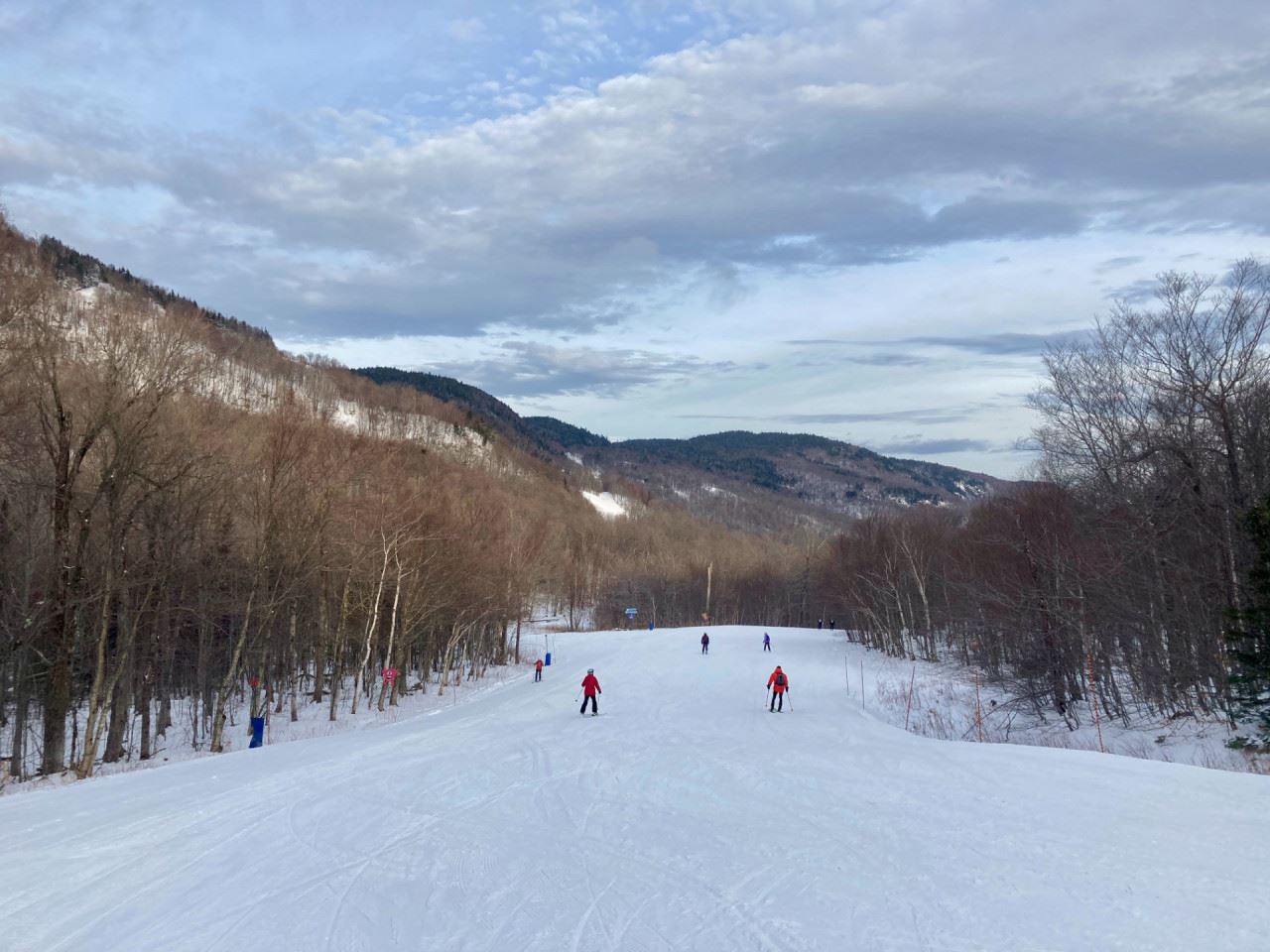 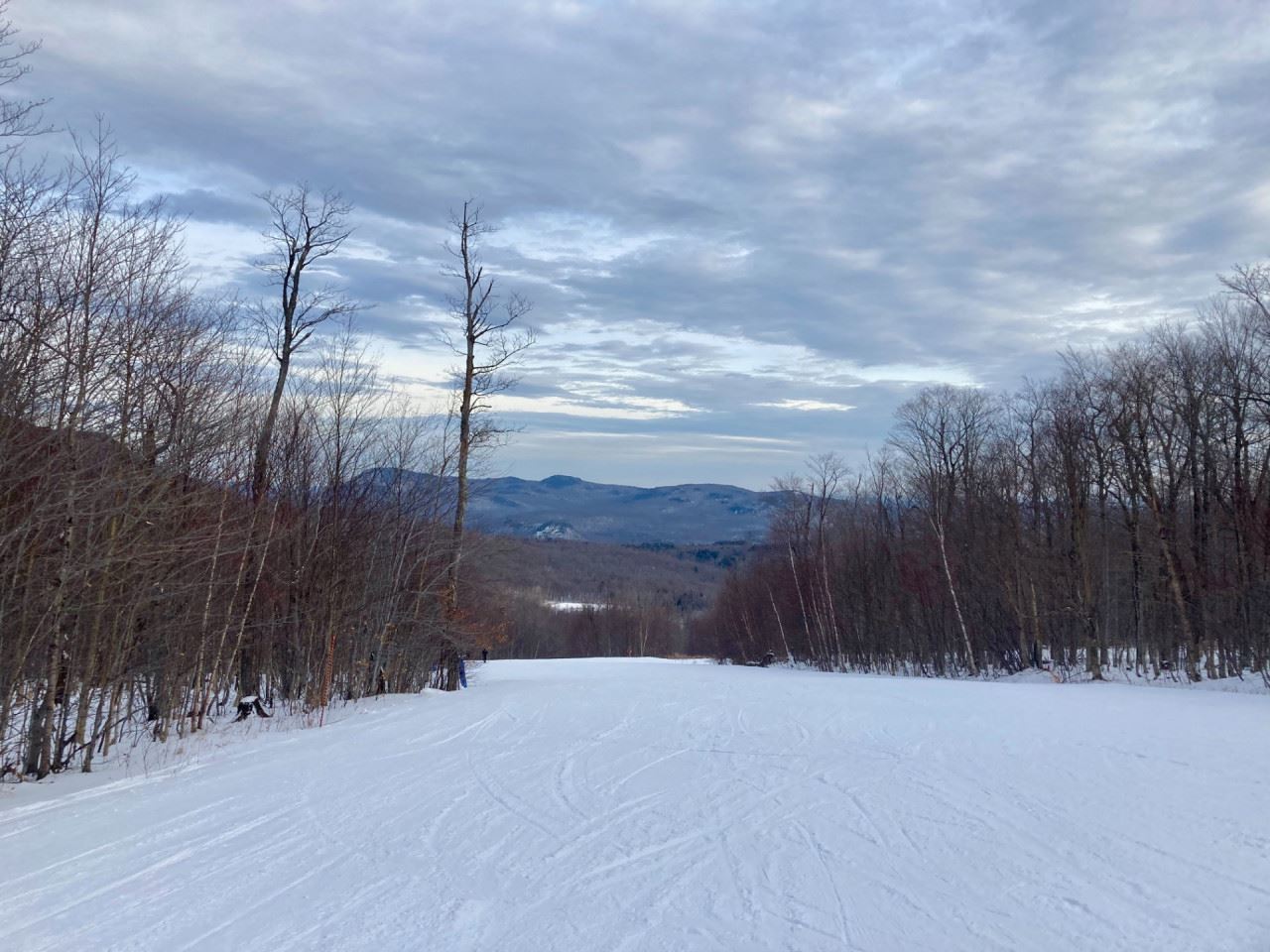 The Bottom of the Familiale: 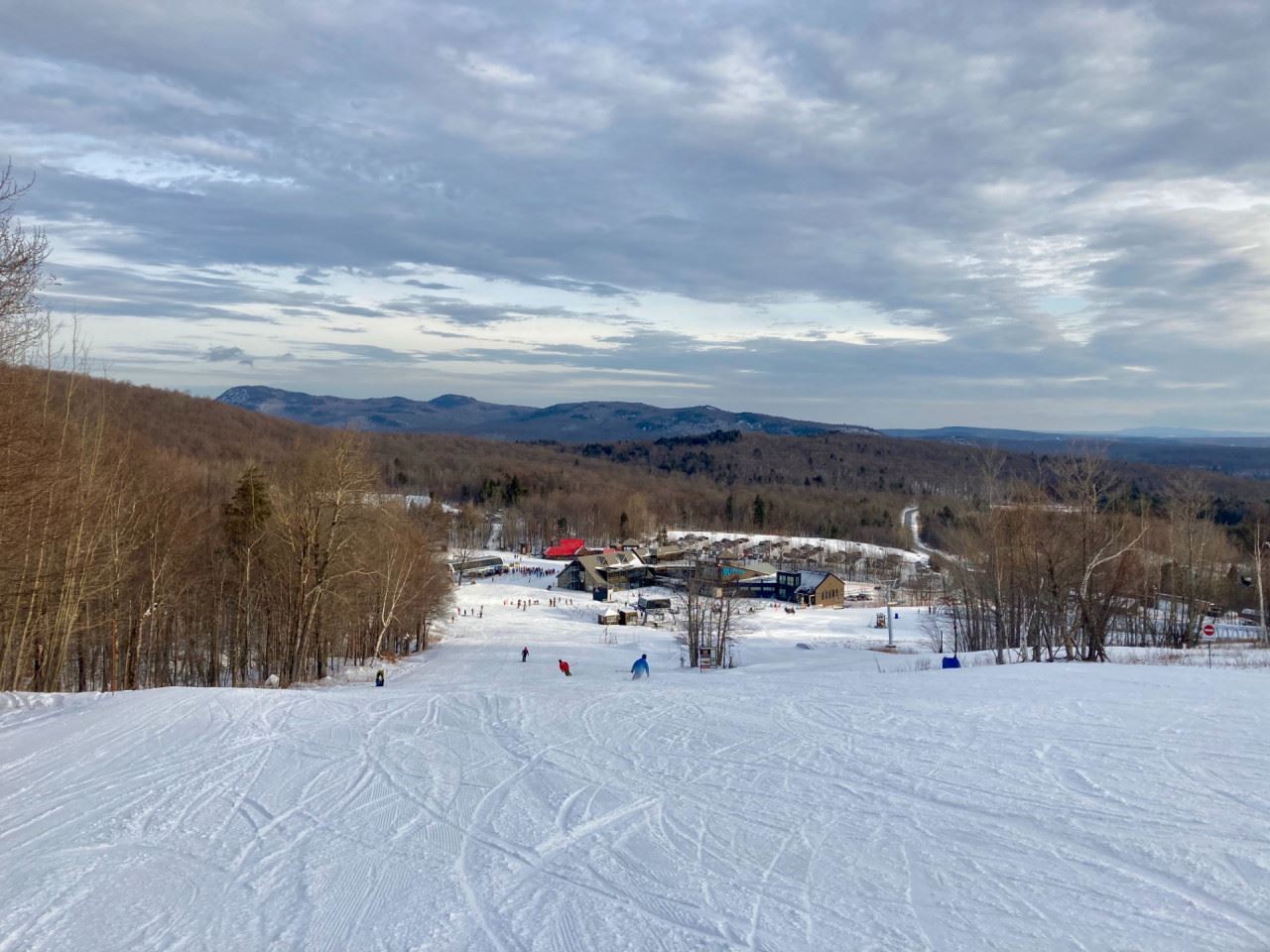 Now it was time to head over to the Hybride for a few laps. The line ups weren't that long in wait time. It looked long because of the 2 meter distancing, that everyone was respecting. It was all marked out for spacing so everyone knew where to stand. I spent maybe 2-5 minutes at most waiting. The lines were moving smoothly with the line attendants directing traffic efficiently. At the Hybride they were loading 3 per chair, one person on each end and one in the middle. The gondola cars were loaded with 2 people properly spaced. The first lap down was the top of the Trois Ruisseaux and on to the Maxi. There were more skiers up here, and plenty of terrain to be well spaced out. The coverage on both trails were pretty good as well. By this time it was really mild, and the snow was starting to bump up a bit. Here the snow was getting softer, and you could tell you were getting into early spring type skiing. The Rapido Triple was spinning and no wait time. They were loading it one skier per chair, or more if you were in the same household. 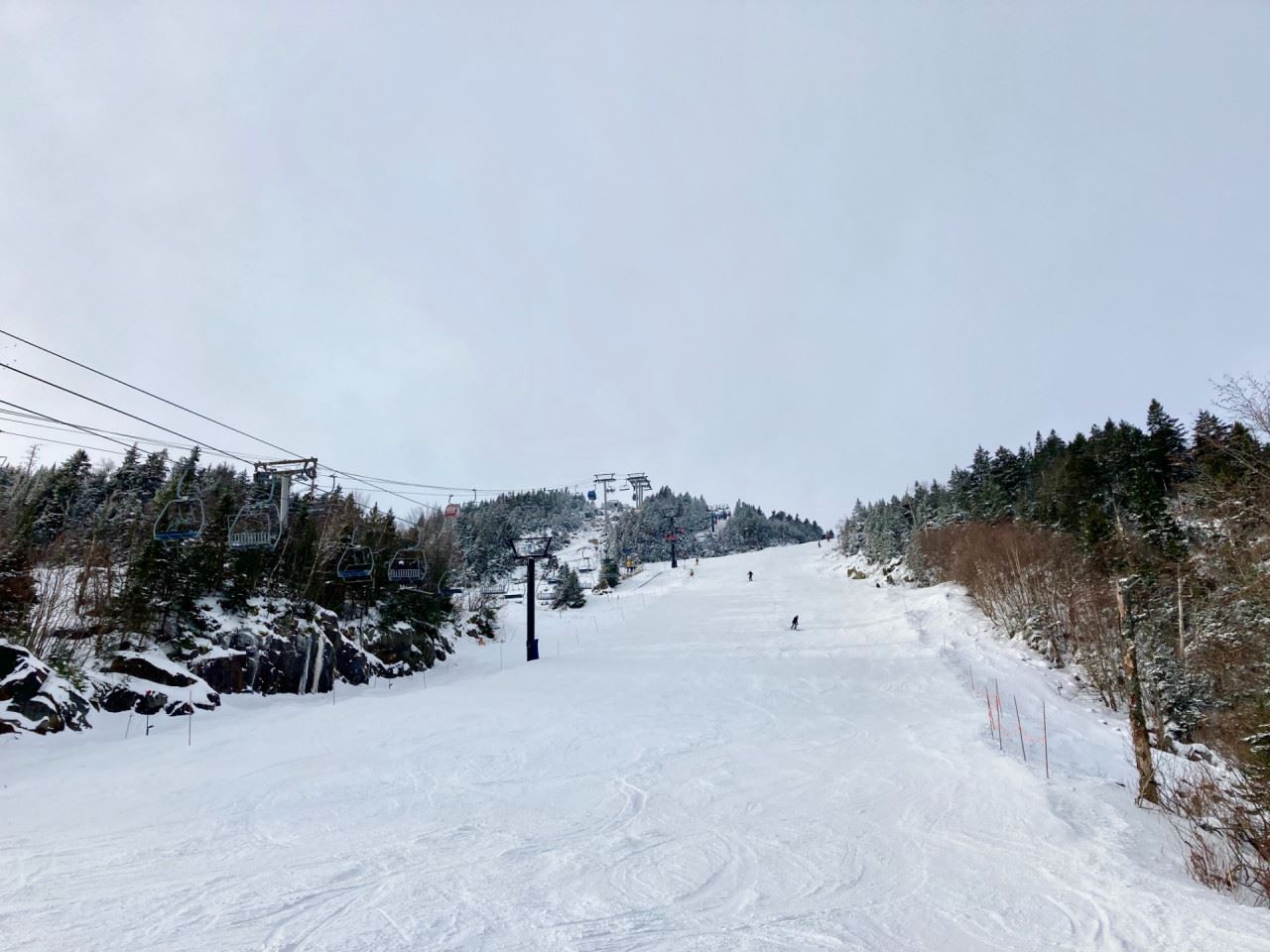 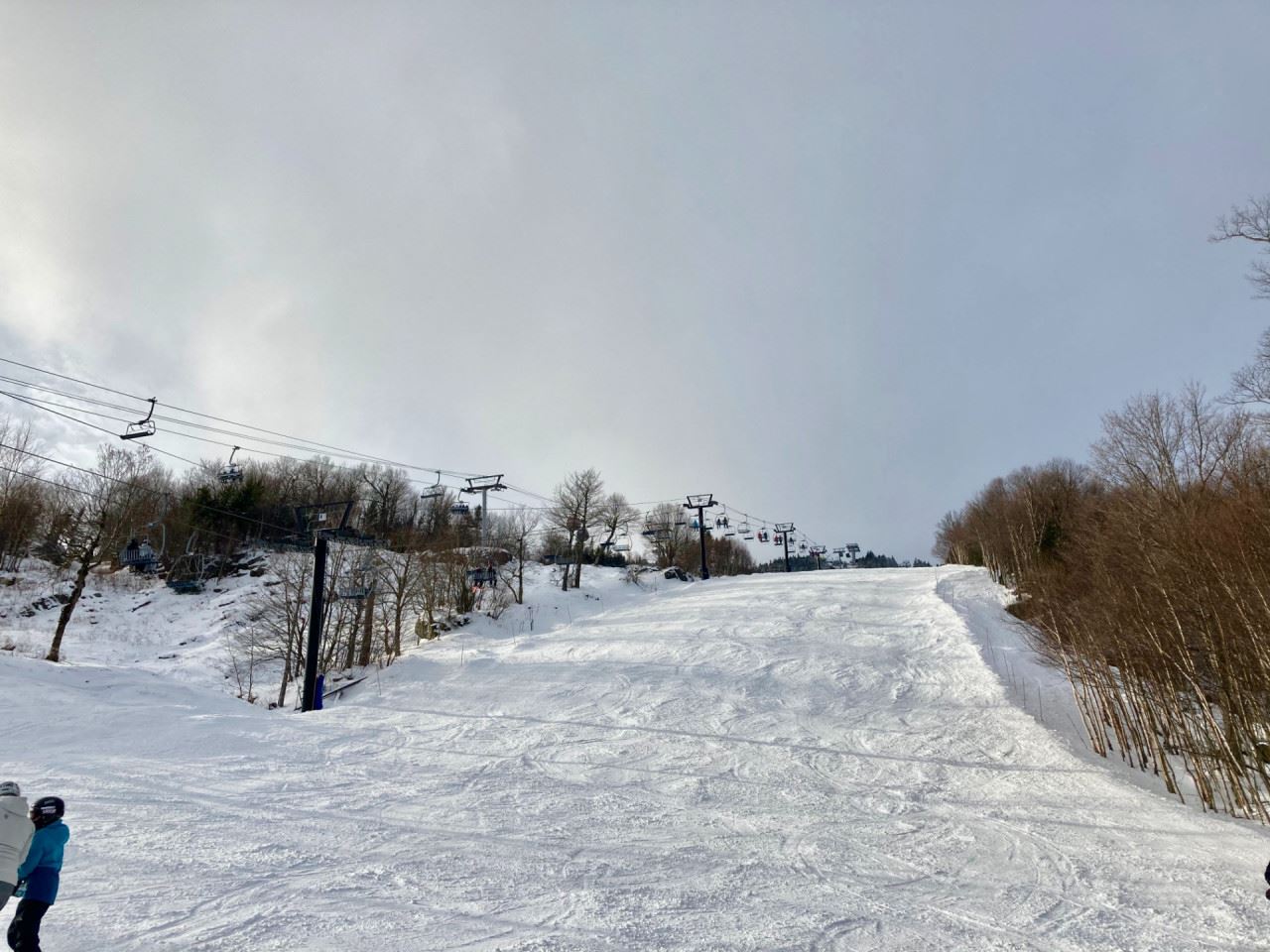 The Bottom of the Maxi With the Rapido Loading Area: 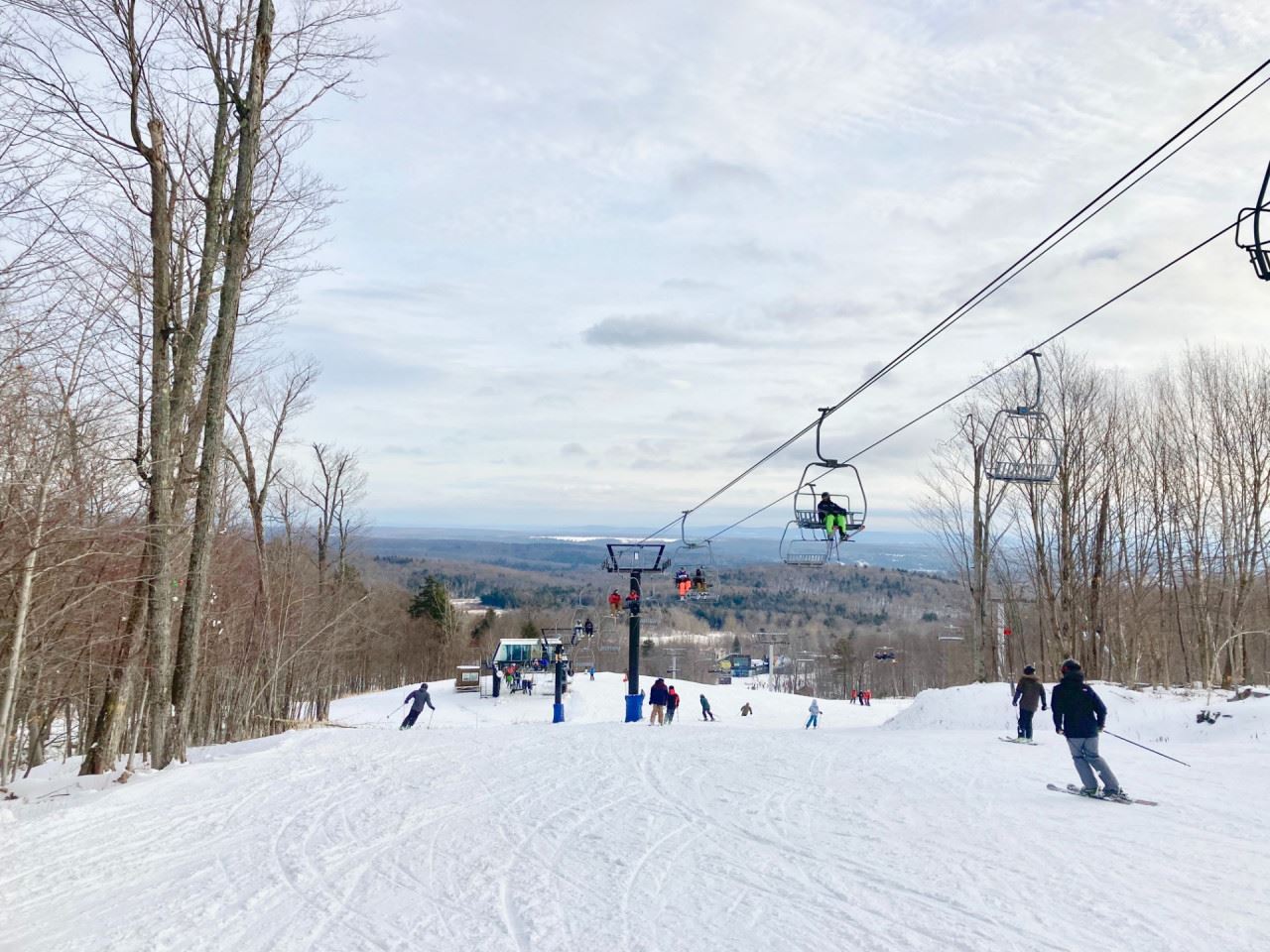 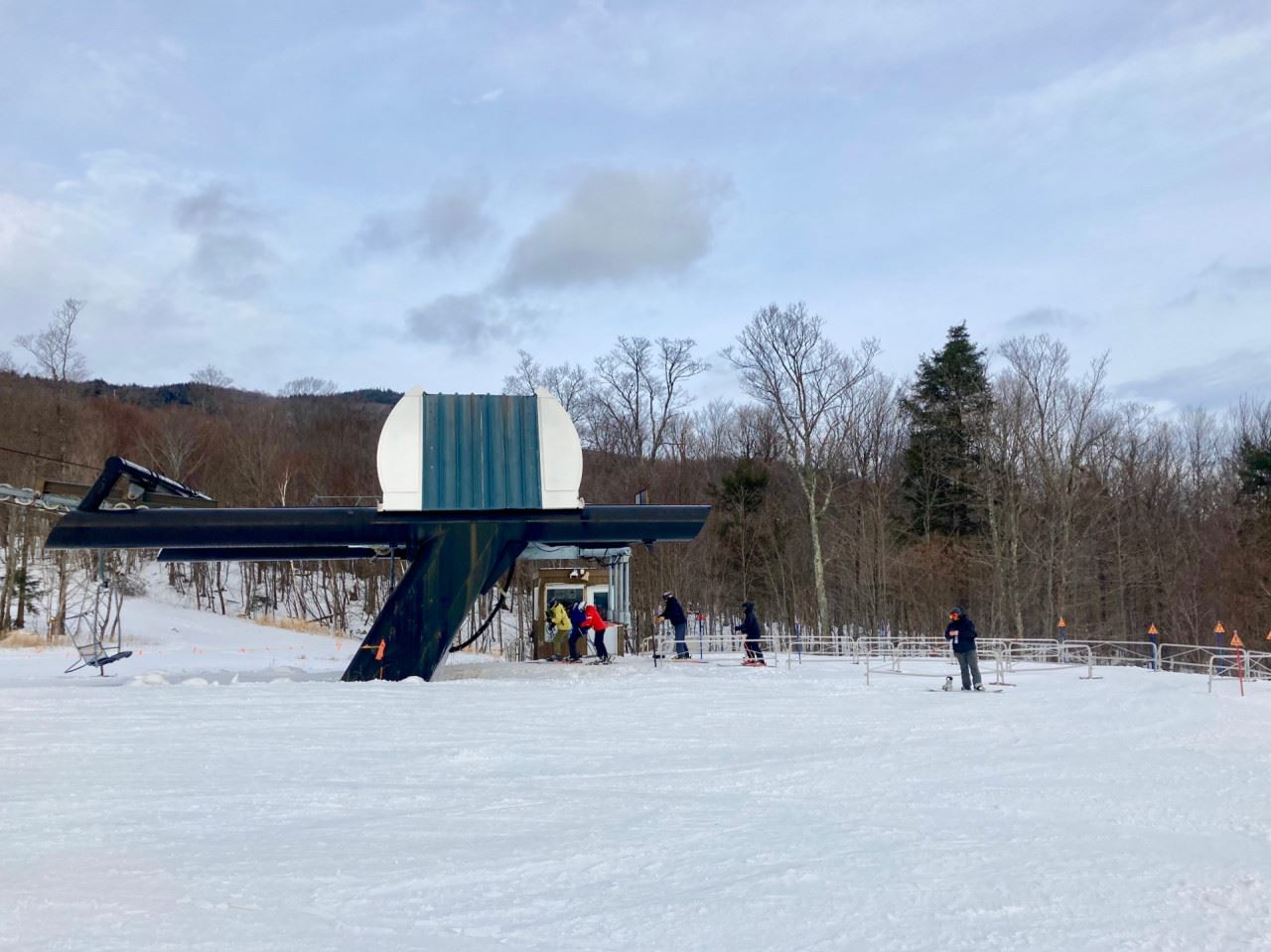 By 10:30 it was time for a break so I headed to the terrace to have a seat. After a about 20 minutes, I headed to the Giroux North Quad for one more run, and to see what I had left in the legs for the first day. By this time the line up for the Quad was longer but still moving smoothly. At a little after 11:00 it was time to call it as the legs were starting to get sore.

The Giroux Quad at Last Run: 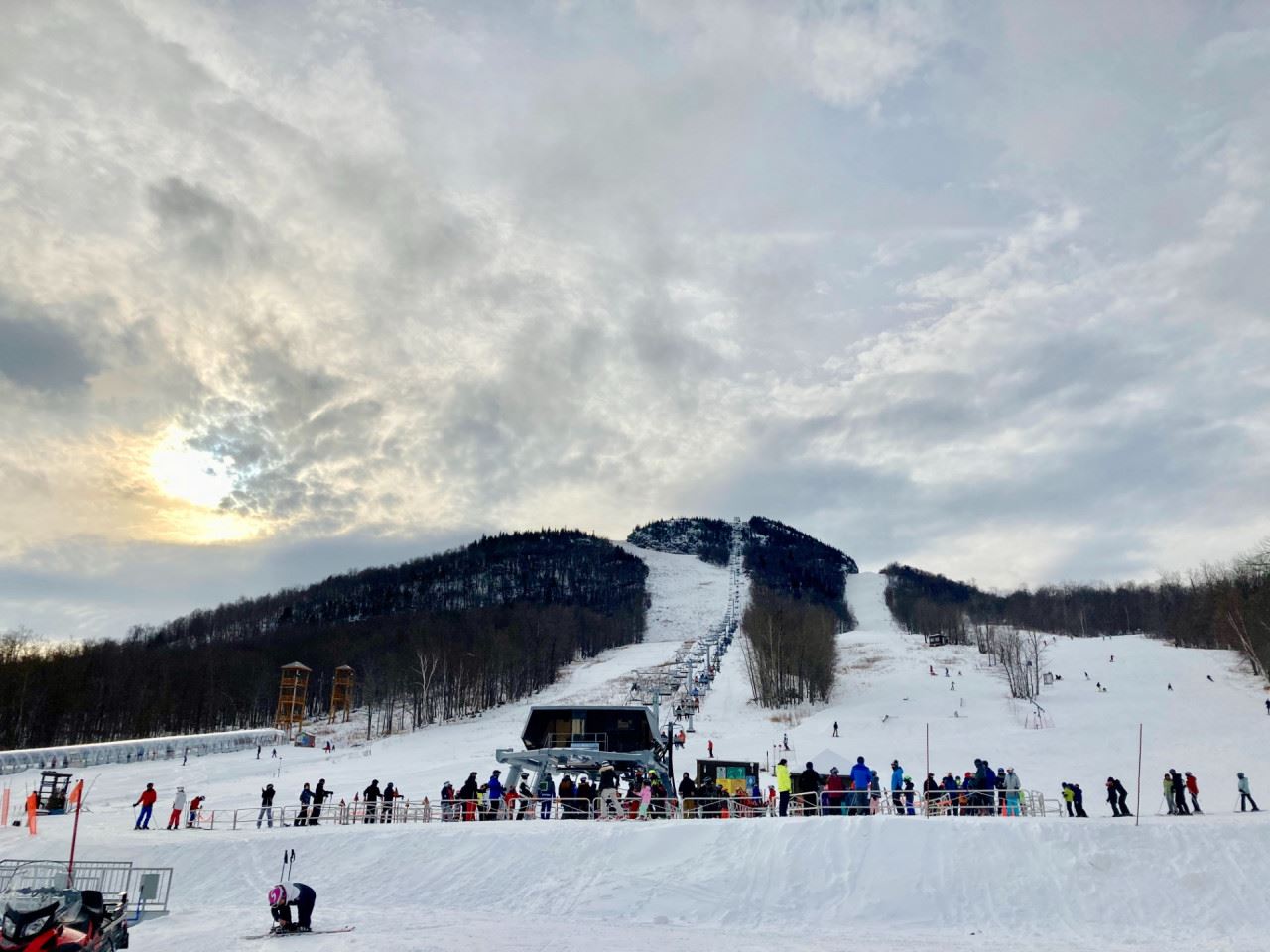 This has been the latest start to the season for me in quite some time. Not the very latest though. The overall experience today with all the new Covid protocols set in place was quite pleasant today. The mountain ops team did a great job of keeping the trails in great shape and covered considering what the weather has been like so far this season. The lift attendants, and lift line crews did a great job managing the flow of traffic. It will be a different ski season for sure, and if everyone does their part, it will keep it going.

A Few More Scenes of the Day: 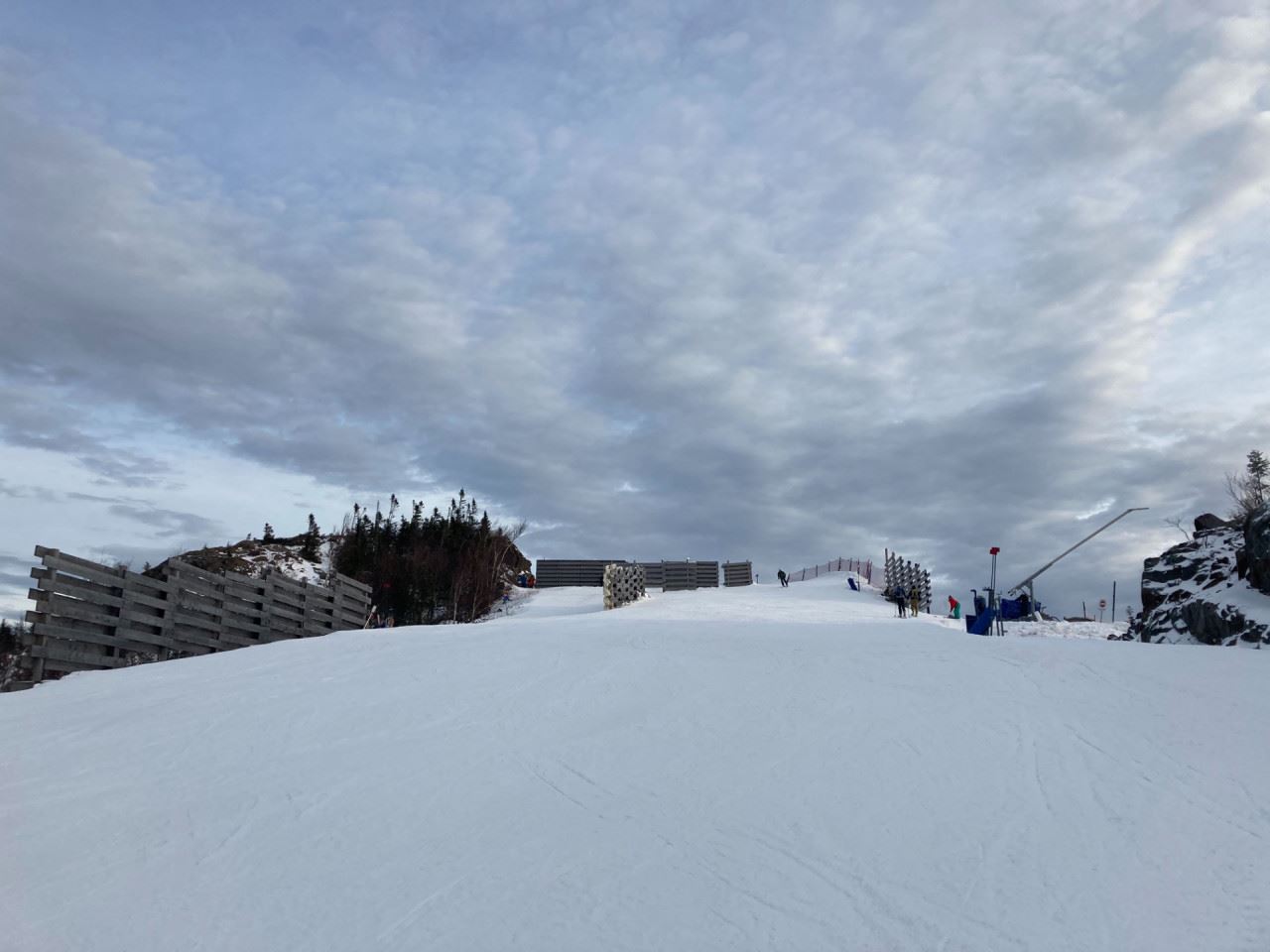 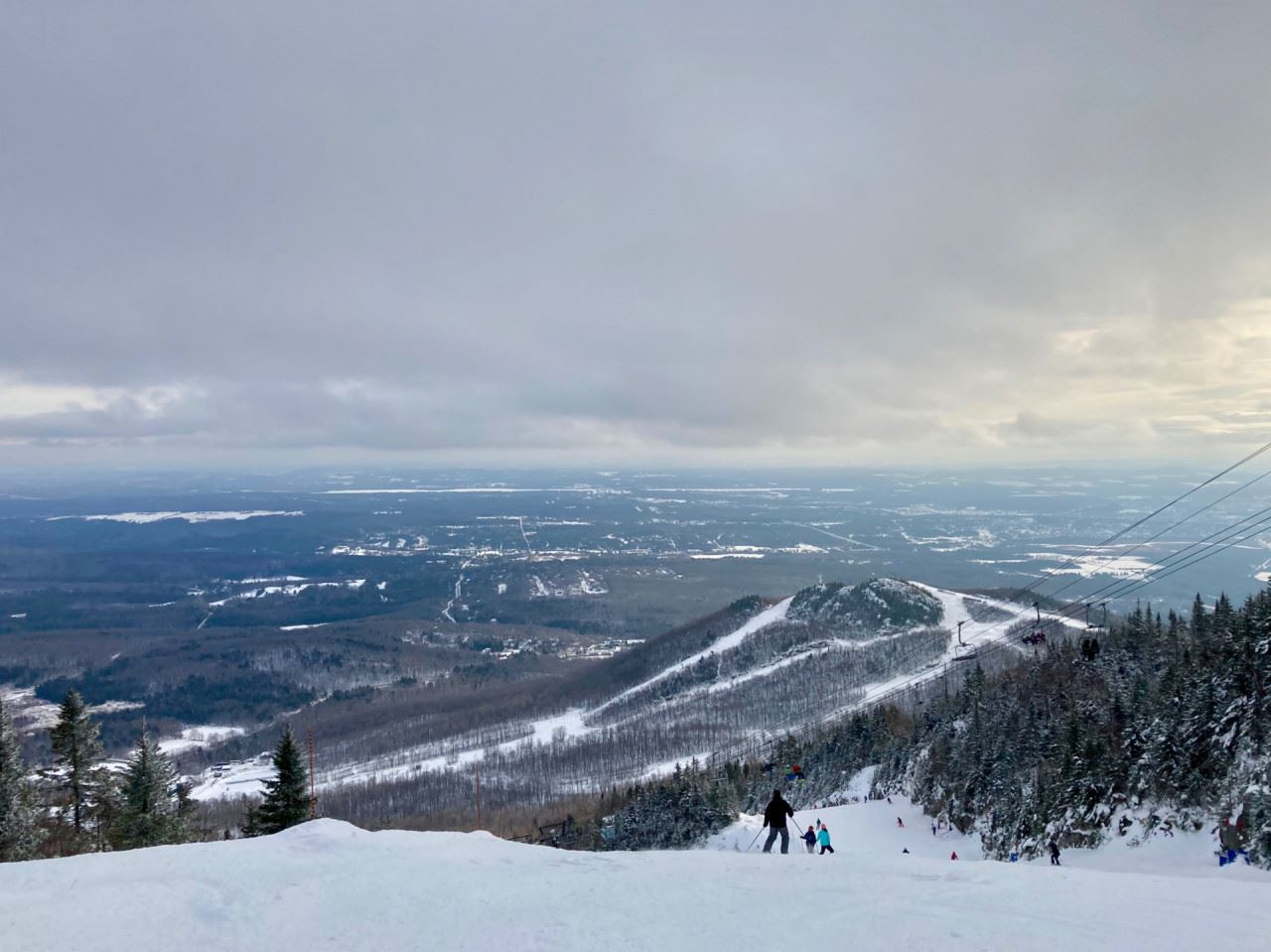 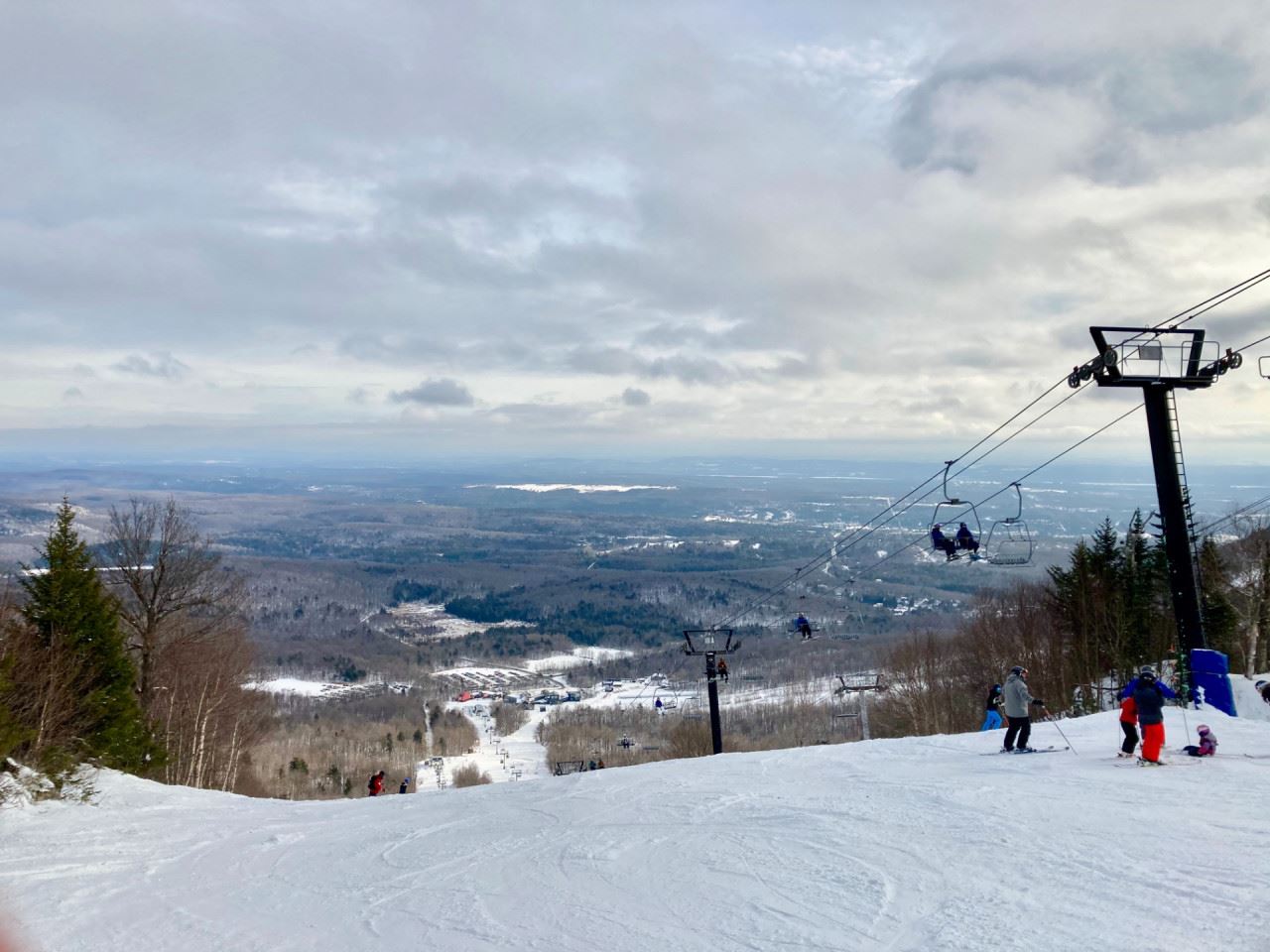