Sommet Saint-Sauveur is located 45 minutes north of Montreal and is easily accessed from Autoroute 15. Sommet Saint-Sauveur is often seen as an innovator in the ski industry, with new concepts, new developments and early adoption of new technologies. The mountain has a storied history from the early 1930s when it first opened and is regularly the first mountain to open and the last to close in the Province of Quebec, and on occasion in the east of North America. With 40 trails, fast lifts, several base chalets and additional on-mountain activities, not counting on the legendary night skiing, Sommet Saint-Sauveur hits the mark in many areas. 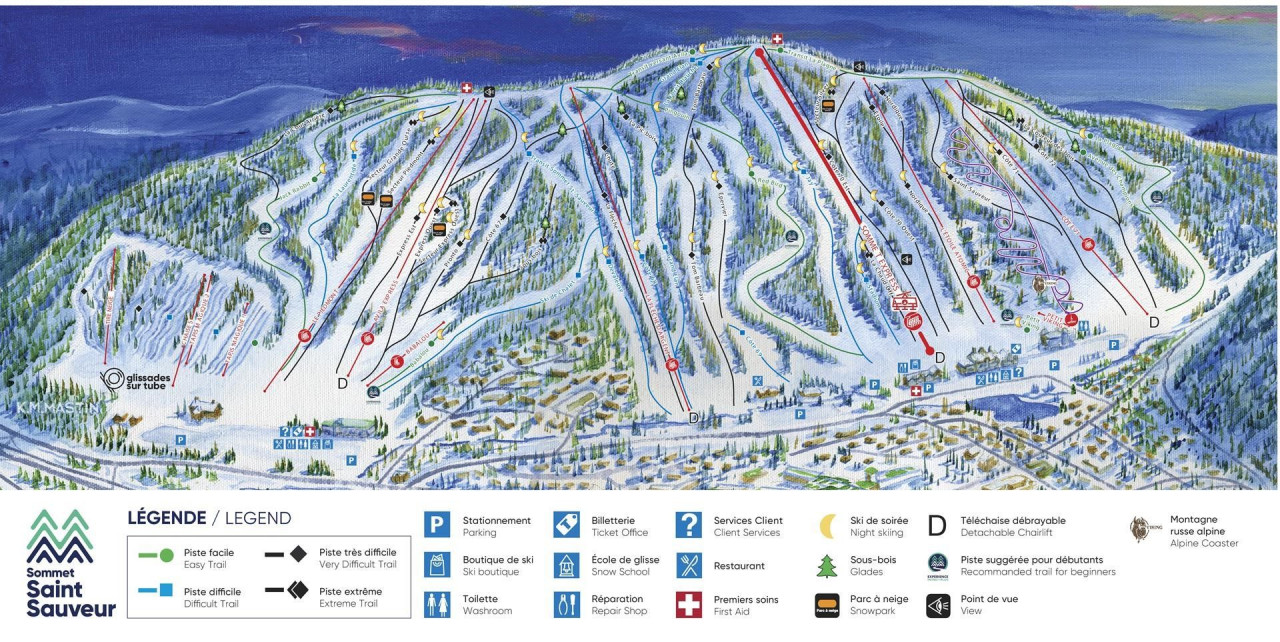 The Mountain and the Ski Trails

The mountain features over 40 trails for all skill levels, served by 8 lifts, which include a detachable six-pack heated chairlift, 3 detachable quad chairlifts, 2 fixed-grip quads (one with loading carpet), a beginner double chair and a magic carpet. The mountain is connected to the Versant Avila, providing additional trails and the main snowparks for the resort. The most popular and classic trails are served by the Sommet Express six-pack chairlift and include 70 Est and 70 Ouest (always the first and last trail to open every season), which provide stunning views of the Saint-Sauveur Valley below. Red Bird, a beginner trail, weaves its way back and forth down the mountain, while its neighbour Jay provides more breathtaking views and a straighter cut down the mountain with more challenge. The trails found between the Flèche d'Argent and Sommet Express lifts are large and wide and offer interesting challenges while also being less frequented by other skiers as a zone less known and visited, leading to the possibility of finding fresh snow for longer than elsewhere on the mountain.

At the far right of the mountain, you will find La Plagne, another beginner trail with a smooth slope down the mountain. This trail is flanked with beautiful homes all along the side as you descend and as a result is very picturesque. The Dévaleuse and Côte 68 trails by the Flèche d'Argent chairlift are the classic intermediate cruisers on the mountain, both offering a constant slope that is perfect to develop the ideal carving rhythm during your descent.

Continuing to the far left you will reach the Versant Avila, a separate ski mountain owned and operated by Sommet Saint-Sauveur. Skiing here is included if you have a lift ticket or pass at Sommet Saint-Sauveur. The trails here tend to be a bit quieter and less busy as a result but still offer lots of enjoyment and challenge. You will also find the massive snowparks, taking up to two and a half trails, complete with massive jumps, and a large variety and collection of rails, boxes and modules to hit and grind. The Express trails are very wide trails, offering several different lines down the mountain with plenty of speed, while nearby Laurentienne and Jack Rabbit contain several rolls in their slope. Lastly Sous-Bois, a gladed trail, is the largest tree run on the mountain, offering an easy experience at the topmost portion while increasing in challenge as you descend further.

One of the most defining and widely known facts on Sommet Saint-Sauveur is that it always strives and succeeds at being the first to open and the last to close in the Province of Quebec, thanks to a high-performance snowmaking system along Côte 70 Ouest. The Sommet Express, unique in Canada as the first six-pack heated chairlift, offers a comfortable quick ride to the top while at the same time helping keep you warm along the way. The mountain ambience and animation that is regularly found on weekends, holidays and in the spring is legendary. The main base chalet has a half-moon amphitheatre outside, with a clear view of the trails, often having a live performer in the warmer days of the season.

The mountain also features two four-season rides, such as the Viking, an alpine coaster where you control your speed during your descent through and over some ski trails, and the Dragon, a two-seater zip-line ride, soaring over the lower portion of the mountain.

Once the winter ends, the summer begins and Sommet Saint-Sauveur transforms into a mountainside waterpark, filled with plenty of waterslides, more rides and attractions. In the spring, the Sugar Shack on the Versant Avila side of the mountain offers up classic Quebec dinners as well as the traditional taffy on snow delight.

Finally, the Vallée de Saint-Sauveur village offers plenty of hotel, condo and lodging for overnight, weekend or longer stays, as well as a multitude of restaurants for all tastes and a large shopping and factory outlet district.

If you are looking for a mountain that offers great grooming, a fantastic night skiing experience, additional side activities (such as alpine luge, snow tubing, etc...), and an après-ski that is second to none, Sommet Saint-Sauveur has you covered. From the vast skiable domain, to the views of the valley and the ambience all over, this ski area has the big mountain feel without the downsides that typically come with such a status. It's the birthplace of skiing in Quebec filled with a long history that deserves a trip down its slopes. 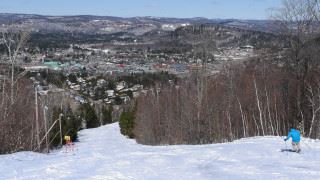 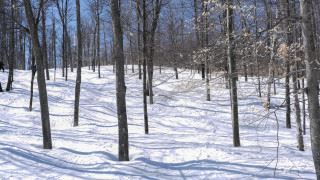 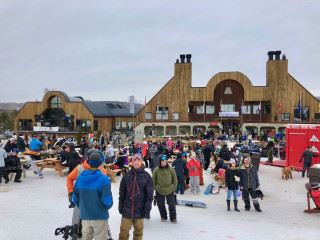 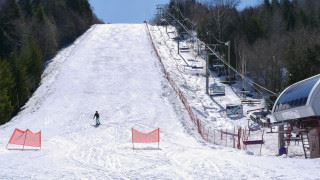 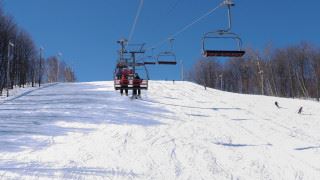 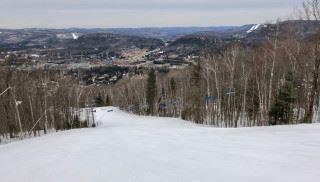 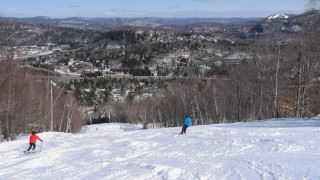 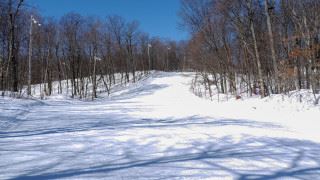 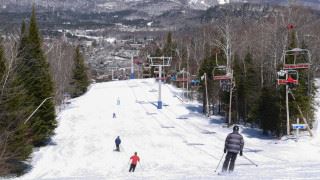 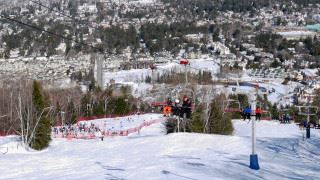 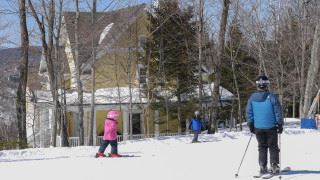 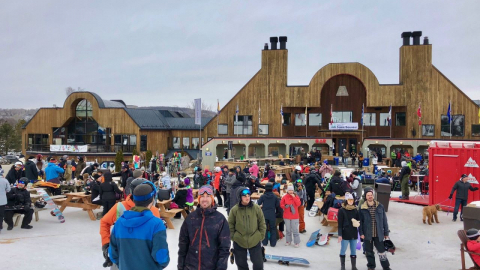 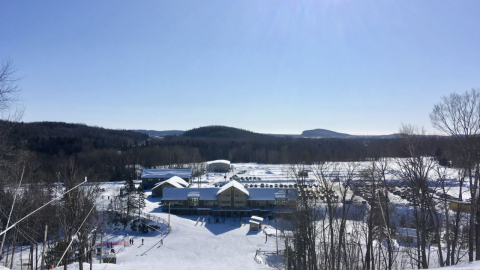 Vallee du Parc is a 2-hour drive from Sherbrooke, and just under 2 hours from Montreal, heading towards Trois-Rivieres along Autoroute 40, and Autoroute 55 to Shawinigan. The mountain is… 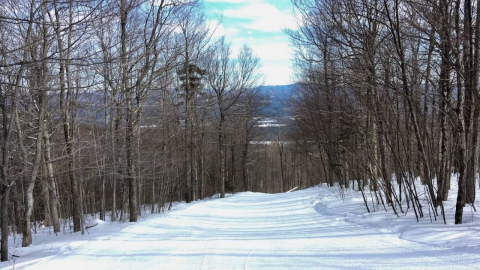 Tenney Mountain Resort is a two and half hour drive from Sherbrooke, three and a half hours from Montreal, and two hours from Boston. Conveniently located 15 minutes from Interstate… 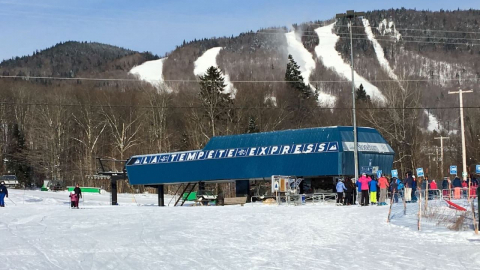 Stoneham Mountain Resort is located 25 minutes North of Quebec City just off Autoroute 73 before you enter Parc National de la Jacques-Cartier heading towards the Saguenay. There are 42… 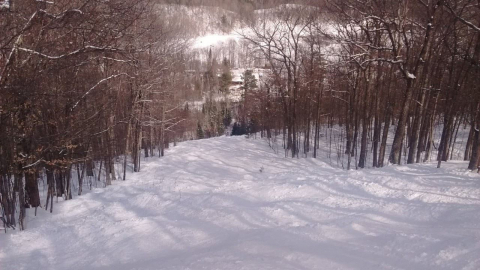 Mont Chilly is located just north of Fort-Coulonge, in the Pontiac region of Western Quebec. The drive along Highway 148 from downtown Ottawa/Gatineau takes about 1.5 hours. Another option is…
No items found.